In spite of this area having a fantastic climate for growing things, sometimes there are failures. It might be poor soil, it might be an unfamiliarity with the difference between gardening in Mexico versus gardening in New York, poor sun or too much sun, not enough water or too much. Could also just be bad luck, but this post will discuss my most recent failure.

As you all know, I had wanted a moon garden for years, and set about creating one in the past few months – white flowers more visible in twilight or at night with fragrant perfume. Initially I did not have the malla sombra – a frame with fabric to provide shade – to protect the most delicate ones from the harsh sun, and so about 7 of my plants died.

Once the malla sombra was up, I replaced the dead plants with gray/white succulents and white gardenias. But, the crown jewel for this garden was to be my Queen of the Night (Reina de la Noche) – in my mind, a spectacular flower. Here is what it should have looked like: 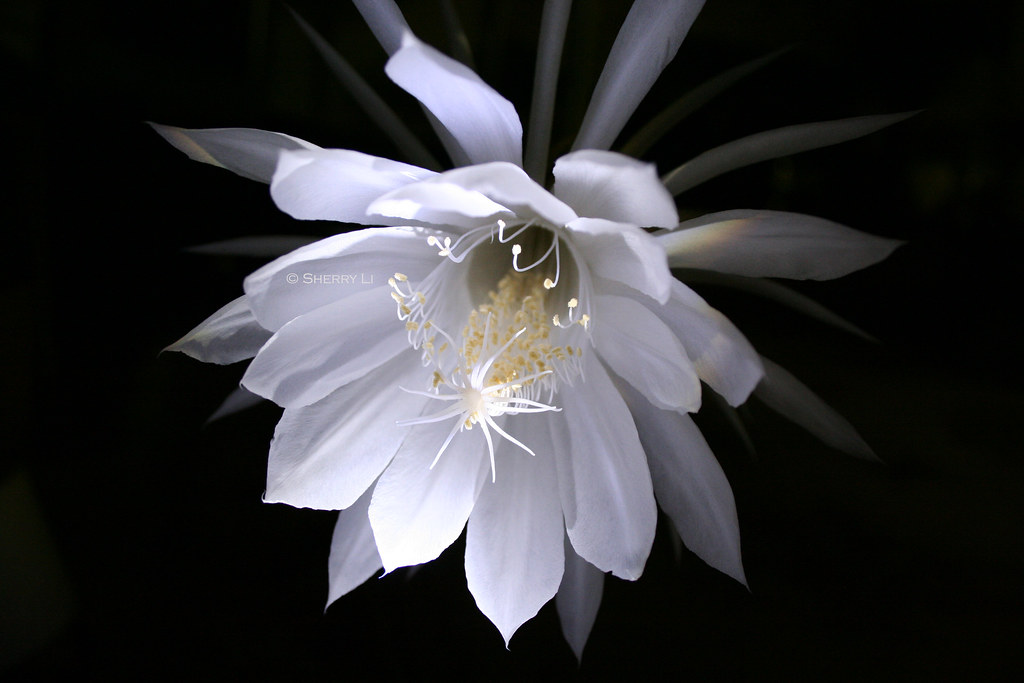 And so I purchased and planted one of them, tended it carefully and checked to see when flowers would appear. And a few weeks ago, three of them appeared.

I was very happy and hopeful, but at the same time taken aback.  The stems of the flowers were actually growing from the edge of the leaves, and were hanging down like snakes. I had never seen anything like it, and the first thought that came to my mine was Audrey II from Little Shop of Horrors.

For those who don’t know the story, Little Shop of Horrors is about a plant (named Audrey II) in a gardening shop and this plant lives on human blood, or eats whole human beings. In any case, seeing these flower buds, I can never get the image of Audrey II out of my  mind, so I have christened my queen “Audrey.”

I observed her every day, talked to her waiting for her magnificent flowers to bloom. And it did seem like they would:

However, today – in spite of the rain, the sunshine, the malla sombra so carefully and lovingly constructed, I found dried up buds, brown with the texture of tissue paper. The stems continue to have good turgor, but I fear the buds themselves are a lost cause…

On a hopeful note, there are still leaves that have not sprouted stems and buds , so I am sure that I will see the beautiful flowers of the Queen eventually.

Just as my bougainvillea appeared to be undeniably dead, yet came back to life with the rain,

I have hopes that Audrey will once again produce buds which will become the flowers that signify her royal name.

Greetings again from western Mexico. As the title states, it is now the rainy season, resulting in changes in the way I garden. It does not rain all day every day, but for most days, it will rain off and on.

Normally you will have creatures flitting about, or crawling about, drinking nectar, collecting pollen, eating leaves, etc., etc. – your hummingbirds and an assortment of other types of birds, bees, ants, and so forth. We also now have an overabundance of flies in addition to the normal tiny biting things that you don’t even see half the time. What you do end up seeing are the pin-prick holes and welts on your skin after they bite, which you notice once that area starts to itch.

And so, as a result, this is my gardening outfit:

Kerchief on my head to keep those pesky flies out of my hair and ears. Long-sleeved shirt to keep the little biters off my arms. Gloves to protect my hands from spiny plants waiting to impale my fingers, or crawly things hiding at the base of plants or in the dirt. No scorpions during the wet season, but still there are worms, probably an occasional spider and who knows what else.

Long pants to protect against spiny things, creatures and dirt. My beloved Skechers sneakers which are used solely for gardening and my morning walks as they get hopelessly dirty and often wet.

Sometimes, when it becomes unbearably hot, I will wear short sleeves, but the long pants and sleeves do a good job of protecting my skin against the sun. And when it gets too buggy, I put repellent on what little skin is showing.

Since this is the first rainy season I have experienced while living in my house, I am discovering new plants and fruits that I had not seen before with the explosion of growth that comes from the generous supply of rain water falling on my garden.

My avocado is now producing its bounty having been pruned and now watered.  It is difficult to see the avocados as they blend in perfectly with the leaves, but I have been able to make out 4 avocados so far.

The guayaba japonesa – Japanese Guava – is producing multitudes of green fruit which turn red when ready for picking:

The pink lilies and bird of paradise plants continue to bloom as always, but now other pink flowers are also beginning to show themselves:

There is an explosion of green coffee berries on my coffee trees, which will eventually ripen into red berries ready for picking. However, since it takes 8 pounds of berries to make one pound of coffee, I’ll still have to buy 99% of my coffee from the local growers, though it will be fun to try to process what little I have in my own house.

And then there is my pumpkin patch. I planted about 10 seeds, and the vines are taking over that corner of the property, including winding their way around tree trunks. I see quite a few flowers and lots of large green leaves that haven’t been eaten by insects, so I imagine I will have a nice supply of pumpkins from which I can make homemade pumpkin pie, instead of having to use camotes or go all the way to Guadalajara to find store-bought pumpkin pie or cans of pumpkin.

My neighbors can also make jack-o’lanterns from real pumpkins – I do see plastic ones occasionally…..

I still have hope to see chayotes from the vines. They are covering the frame so much so that the grass underneath has plenty of shade, the vines are reaching up into nearby trees, and I see lots of flowers which hopefully will turn into the edible chayotes now that fertile soil has been mixed into the soil at the base of the vines.

And I am still waiting to see the flowers on my banana trees which will indicate that the long-awaited bananas will finally appear, with each tree producing enough to feed my entire street.

And finally, there is my moon garden – the malla sombra is providing much-needed shade while allowing the rain to nourish the plants. The dead plants have been removed with new plants added – 4 grayish-white succulents and 6 gardenia plants which are providing a very nice perfume.

When my Queen of the Night finally blooms, that will be a separate and special posting all to itself, but meanwhile, here is my beautiful moon garden as it is right now:

And finally, a few random pictures of other flowers to finish this off:

And a pleasant good evening from all of us at Casa Paty – me, Peach and Ginger. Hasta luego y buenas noches…..

Well, the rainy season is upon us. With the rain comes an explosion of green, growing things – grass, trees, flowers, and clean, fresh air. It may be cloudy during the day, but mostly the rains come during the night or late afternoon and evening, leaving daytime free to do chores.

view from my porch in the rain

There are no more scorpions to be seen.  They have been replaced by hordes of flies, and of course the little geckos are still around.

However, there are now two new creatures – toads and something that looks like a miniature iguana.  I had seen toads as road kill during my walks last year, but now I am in my house and hear them in the dark, calling to each other, and in the darkness I can see their silhouettes on my stone driveway and sometimes hopping around on my porch.

This one was resting between a flower pot and the edge of the porch. I almost didn’t see it, nor get a photo of it. They seem to know when they’ve been spotted and disappear by the time I can grab my camera.

This particular one was larger than my fist. The kitties didn’t seem to interested in it, but they definitely WERE interested in this guy:

I was startled when I came upon it. My neighbors tell me it is not an iguana, but couldn’t decide what it IS called. I’ve seen iguanas up close, and I know they move exceedingly fast, and this creature was just sitting there, very still, and was a lot smaller than an  iguana.

At one point, I thought it might have died, as I saw ants crawling over its body and it still wasn’t moving, so I threw water on it to get rid of the ants. Then Peach started pulling on its tail,  it inhaled a deep breath, so obviously it was alive.

Glad Ginger didn’t get bit, as you can see from one of the photos that it has some nasty teeth. After a while, they lost interest in this new creature – or else simply became more cautious – and left to play in another part of the yard.

I went inside the house and came out after a while to find that it had disappeared. I had feared that it was sick, but maybe it just took that opportunity to escape our prying eyes.  That was a huge relief, as having to bury it if it had died was not a pleasant thought.

So here ends my tale of the newest seasonal creatures with whom I share this land. Until next time, have a pleasant week wherever you are…..