Well, the rainy season is upon us. With the rain comes an explosion of green, growing things – grass, trees, flowers, and clean, fresh air. It may be cloudy during the day, but mostly the rains come during the night or late afternoon and evening, leaving daytime free to do chores. 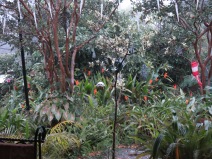 view from my porch in the rain

There are no more scorpions to be seen.  They have been replaced by hordes of flies, and of course the little geckos are still around. 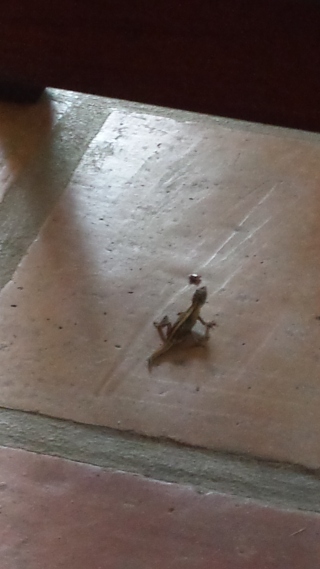 However, there are now two new creatures – toads and something that looks like a miniature iguana.  I had seen toads as road kill during my walks last year, but now I am in my house and hear them in the dark, calling to each other, and in the darkness I can see their silhouettes on my stone driveway and sometimes hopping around on my porch.

This one was resting between a flower pot and the edge of the porch. I almost didn’t see it, nor get a photo of it. They seem to know when they’ve been spotted and disappear by the time I can grab my camera.

This particular one was larger than my fist. The kitties didn’t seem to interested in it, but they definitely WERE interested in this guy: 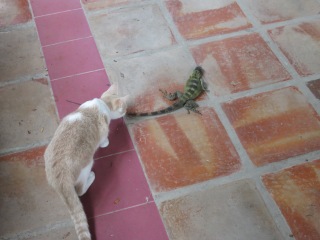 I was startled when I came upon it. My neighbors tell me it is not an iguana, but couldn’t decide what it IS called. I’ve seen iguanas up close, and I know they move exceedingly fast, and this creature was just sitting there, very still, and was a lot smaller than an  iguana.

At one point, I thought it might have died, as I saw ants crawling over its body and it still wasn’t moving, so I threw water on it to get rid of the ants. Then Peach started pulling on its tail,  it inhaled a deep breath, so obviously it was alive.

Glad Ginger didn’t get bit, as you can see from one of the photos that it has some nasty teeth. After a while, they lost interest in this new creature – or else simply became more cautious – and left to play in another part of the yard.

I went inside the house and came out after a while to find that it had disappeared. I had feared that it was sick, but maybe it just took that opportunity to escape our prying eyes.  That was a huge relief, as having to bury it if it had died was not a pleasant thought.

So here ends my tale of the newest seasonal creatures with whom I share this land. Until next time, have a pleasant week wherever you are…..

One thought on “The Animal Kingdom”