I have been traveling for the past month, and will write about that, in installments, shortly, but for today I will write about my adventures yesterday. What started out as a normal day turned out to be quite eventful.

I will disguise my neighbor’s name by calling her “G,” but I am sure that within a day or two everyone in the village will have heard this story, and the people involved, including myself, will be laughing about it.

And that is the thing about life here – nothing is secret and everyone laughs about events, including the person involved. For example, when I went on a pilgrimage to Mexico City with a bunch of the women from here, I was amazed at how cheap it was for the bus ride and 4 nights in a hotel. Turns out it was cheap because they put 4 of us to a room.

One of the women I was with snored like a bear as soon as her head hit the pillow. The first night wasn’t bad, since they decided to go out that night, so I was alone in the room when I went to sleep, but was awakened by the snoring at around 4am.

Each morning, we would be on the bus around 6am and come back to sleep around 10 or 11pm.  By the third night, due to lack of sleep and long hours of our pilgrimage, I just HAD to get some sleep. Stuffing tissues in my ears and putting the pillow over my head didn’t work, so I took my blanket and pillow and tissues and went to the bathroom. I stuffed the tissues in my ears, closed the door and slept on the bathroom floor with my blanket and pillow.

The women found me the next morning on the bathroom floor and were hysterical laughing when I explained. Of course, that became the main topic of the trip, and when we returned, the entire village heard the story.

When the event happened, I was mortified for the woman involved. In the United States, from my experience, it would be something you would not talk about openly, but here, she was often the person who brought up the subject.

As an aside, for the next and final night, we were in a hotel where our section had two rooms with single beds and one room with two beds – I got one of the single-bedded rooms and finally got some sleep.

So on to yesterday. My granddaughter Brenna is visiting from New York. She, I and my neighbor G got into my car yesterday around 11am to go into Colima to do some shopping and have lunch.  Halfway there, I looked at G to find her vomiting on herself. On the seat. On the floor. On the door and seatbelt.  In the front passenger seat.

There was no place to pull over. At first I wanted to turn around and go home, but realized that there was a clinic nearby when entering Colima, so decided to go there and get her examined. And I prayed that her stomach was empty when she finally stopped.

Just as we passed the roundabout two blocks from the clinic, she started again, so I quickly pulled into the parking lot of a shopping center, got out and opened the door and got her out of the car. Got Brenna out of the car and told her to stay with G, then I ran into the store and bought towels, baby wipes, a bottle of water and looked for a shift.

Usually this store has a ton of shifts, or house dresses/sun dresses. There must have been a sale, because all I could find were slips and fancy pajamas – the kind you wear when you and your husband are looking forward to a good time during the night.  Trying to keep the cursing within my mind and away from my mouth, I kept frantically looking and finally found a nice shift.

Then I had a choice of lines – one woman with tons of stuff or the quick check with a long line of people. I picked the shorter line. And the woman ahead of me had divided up her stuff into 4 or 5 parcels, each to be paid separately! By now I was getting really antsy, but finally it was my turn, I paid for my stuff and raced out to the parking space.

Thankfully, G’s stomach must have been empty. I had her gargle and spit the water, put some of the towels on the seat, and put her and her vomit-covered clothes back in the car, and we proceeded to the clinic.

The clinic staff were very nice and allowed us to go to the bathroom where we cleaned up G and put on her new dress. She was seen by the doctor, given anti-nausea medicine and prescriptions for 5 medications – antibiotics, anti-nausea, intestinal motility regulators, something to restore the intestinal flora – the good bacteria that normally lives there, and vitamins.

I joked that at least she got a new dress out of the deal, and I would wash her clothing for her – and that my car was now baptized.

I kept her in my house for a while to recover while I prepared jello and gave her Electrolit to drink and cleaned my car as best I could.  Meanwhile, my second banana tree had folded onto itself with the weight of the still-green bananas.

So I took my trusty machete, volunteered Brenna to assist and went over to the tree to cut down the bananas and hang then from the ceiling of my porch to ripen. Little did I know there was a nasty surprise lying in wait.

I first chopped away some of the leaves, and suddenly was being attacked. If you look at the upper right hand side of the photo, you will notice part of a white ball – a wasp’s nest that I had not seen! I dropped my machete – since it was useless against wasps, after all, and ran to the porch.

Close-up of the offending wasp’s nest

Fortunately Brenna had not been stung, but the critters got me at least 5 times, on both arms and my face. First things first – I took 50mg of Benadryl, then pondered what to do. Tried spraying Raid, but there was only a light mist falling on the nest, as I couldn’t get too close due to fear and a lot of foliage blocking my access.

I went across the street to my neighbor, and he told me use laundry soap mixed with bicarbonate and water. My aim isn’t too good at that distance, but eventually I was able to toss a bowl of that mixture onto the nest. Still could see some flying around, so I commenced again with the Raid.

After about an hour, I no longer saw any signs of life.  Fortunately for me, I have two machetes – a long one and a short (14″) one. I picked up my machete in one hand and a can of Raid in the other and, after cutting back some of the foliage in case I needed to make a quick escape, went down to investigate.

I poked at the nest – no sign of life. Turned over the leaf on which the nest was attached (the banana leaves are taller and wider than I am) – still no sign of life and no stray wasps flying about trying to attack me.

So I called Brenna to come and help, finished chopping the stem of the banana branch, and we hauled it back to the porch. Since they might have a fine coating of Raid, I washed them down with water.

Now here is what my previous bunch looked like hanging from my porch ceiling.

I am sure that after washing them down, and having a thick peel, they will be safe to eat. I will be the guinea pig to eat the first one after they are ripened. So Brenna, at the young, healthy age of 16, was able to carry the bunch to the porch for me. They seemed lighter than the 50 – 75 pounds of the trees seen at the plantations, but still a lot for me at the age of 68 and not very athletic to carry alone.

It was difficult for us to manipulate them into a position where I could tie them up, so I left them in a chair on the porch, where hopefully insects wouldn’t think to look, and when my gardener Angel comes today, we can them tie them up to ripen.

In the meantime, here are some photos of the tree and bananas that were ready for harvesting while I was away. 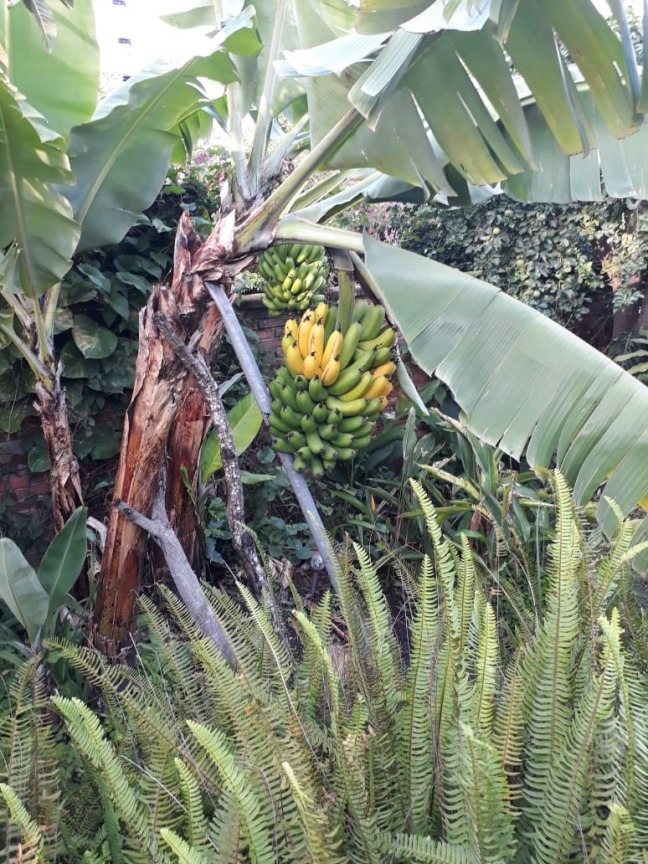 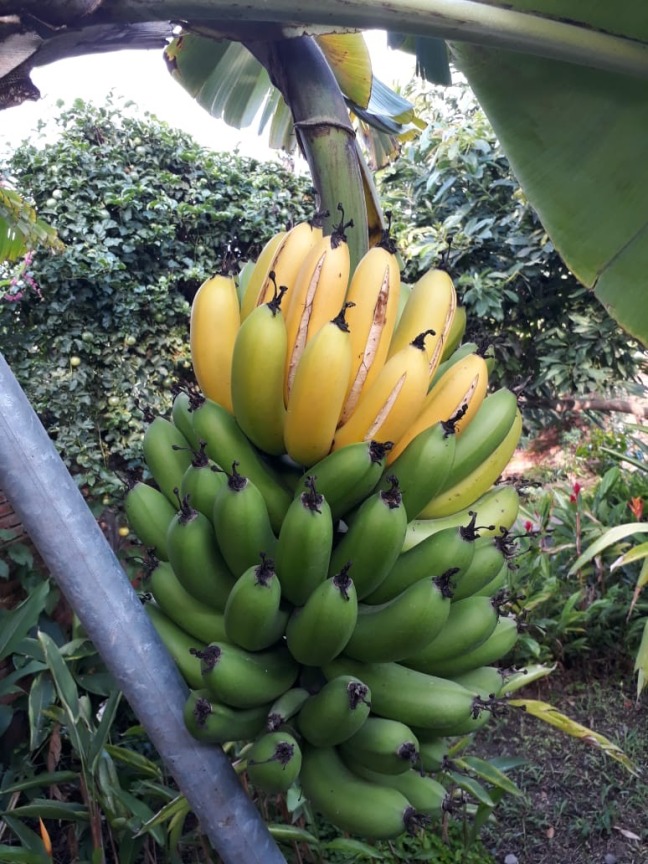 So that is my latest adventure. It will be interesting to see how fast this story makes its rounds. My age, and living alone on my property had me worried – what would happen if I became sick or needed some help –  but my neighbors are always vigilant.  For younger people, they might find this intrusive, but for me it is comforting and I can still have my personal space in my home, but have a community to care for me when needed.