The third annual Volcano Festival in Colima just ended and with one thing and another, I did make it there for two days at the tail end. There were various forms of entertainment during the day, but the main events/shows didn’t start until 9pm. For me that is a bit late, unless I am going with someone who is doing the driving. However, I understand some of the reasoning. I think even in The States, many shows start in the evening, and in Colima you also need to take into account the searing heat. Living here, I can understand why many places close down around 2pm and don’t open again until around 4 or 5pm – and even I have started resting or napping at that time. It’s just too hot to do anything else, though, fortunately, Cofradía de Suchitlán is at a higher elevation, so we are cooler, relative to Colima.

Anyway, the Volcano Festival is much like other festivals, with vendors selling food, clothing and crafts, rides for the children and musicians plus dancers from local schools or dance troupes performing.

Of course, we had a large plastic volcano…

And then, there was a exhibition of dancers on the stage. I was surprised that, in addition to the traditional dances, they had other forms, such as modern dance and Middle Eastern dances.

The stage was next to the fountain, and at first, I thought the drops we felt were from that fountain, but as it continued, with more and more drops I said to myself, “No, this is definitely rain.” Fortunately I was carrying an umbrella, and fortunately for the performers, it didn’t last long. 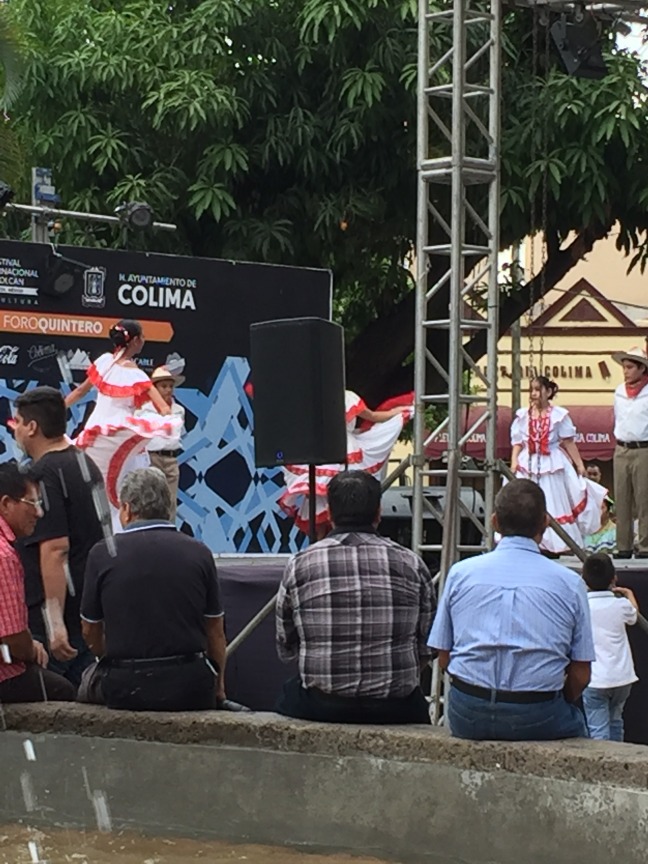 Before the performances, we were wandering around the booths and came upon one that was selling “International” food. The menu had two rows of flags of different countries, and the food they were serving from that country.

Next to the Canadian flag, “poutine” was written. Now when my sister and I visited Quebec, she couldn’t wait to have poutine. When it arrived, it looked like french fries with some white stuff on it and brown gravy. To me, it was very bland, and while it was ok, I would not have gone out of my way to seek it out. My sister said it was a special kind of cheese that is made in Quebec.

The listed ingredients at the festival booth were the fries, mozzarella and beef gravy. I was tempted to try them, but the heat of the day was so fierce that I didn’t think my stomach would tolerate it well, so we had ice cream instead.

After a while, when the dance performances were finished, the mariachis appeared. I had never seen outfits in green before, but they were very good. A girl was handing out leaflets about the restaurant where they perform, so I think when my granddaughter visits in July, we will go there one night.

Their outfits DID match the clothing of a little boy who checked them out, then stood in front of them to dance. 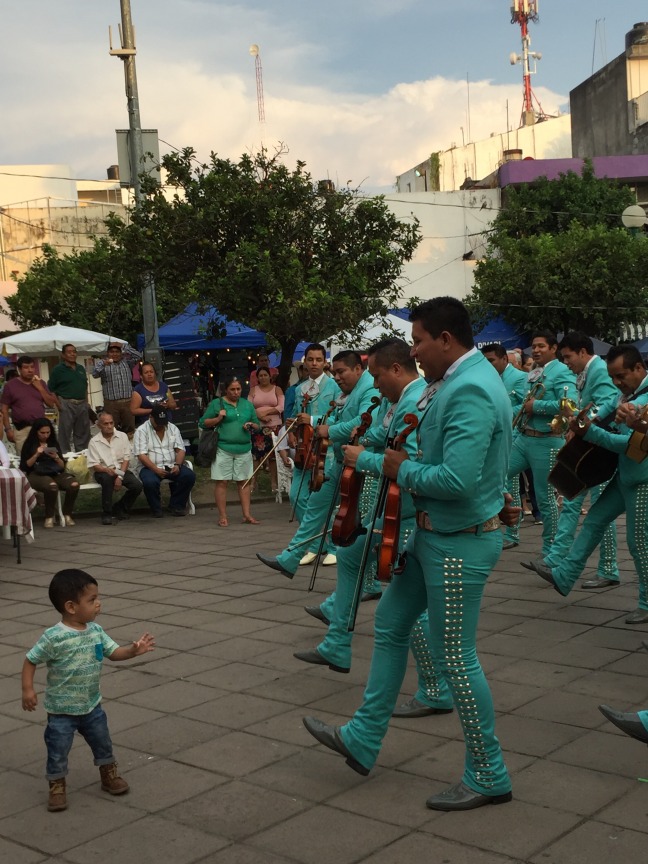 And so that is all for now. Until next time, have a wonderful week…..

When I still lived in New York, I belonged to the Monroe-Woodbury Rotary Club. Each week we would have a guest speaker, and a wide variety of topics would be discussed, with a different subject every week.

One of our guest speakers was a representative of the Shen Yun performance troupe, which performs dances and some singing to illustrate 5000 years of Chinese history over two hours. I had wanted to see their show when I still lived in New York, but for one reason or another, that never happened.

So imagine my surprise when I was browsing the internet one day and discovered that they would be performing in 5 cities here in Mexico – including Guadalajara, which is only 3 hours away. I immediately called my friend Claudia who lives there and suggested a girls’ weekend, which would include taking in the show. She thought it was a great idea, so I purchased the tickets.

Since things sometimes work a little different here than they did back in The States, the web site would not accept my credit card, so after ordering the tickets and picking out our seats, I had two hours to get into my car, go to Comala to an OXXO store and pay for the tickets before my order was canceled. And with that, I had the tickets.

The next stop on Saturday was a Gothic cathedral in Jardín Cuauhtémoc. The church was huge and very ornate, and we noticed that there was a wedding going on inside. Claudia told me that on the hour, music would play and figurines would rotate in a circle in one of the towers. Sure enough, it started while we were there, and I was able to record one minute of it:

We decided to stop in a little shop for coffee, and looking over the extensive collection of different types, I wondered what the Café Carlos V was. Turns out there is a chocolate bar here called Carlos V (Carlos Quinto – or Charles the 5th), so we figured it must have chocolate in it. Being the chocoholic that I am, I had to try it, and was not disappointed.

Here are two photos of the street scene at night: 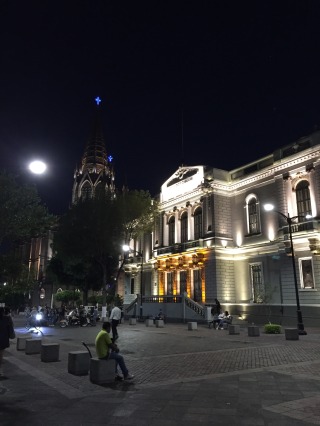 Quite nice, but after a long day, I was ready to call it a night and went back to my hotel.

So – Sunday was to be the big day, attending the performance of Shen Yun – and I received a pleasant surprise. I had read a while back that a local library was going to have an exhibition of artifacts from Tutankhamen’s tomb, and Claudia said the exhibition was still going on and it was walking distance from the theater!

Well, this still being the dry season, there is a lot of construction going on, and with multiple detours, barriers and excavated roads, it took us an hour to get to the theater. While driving around, we noticed what looked like Japanese cherry trees. Claudia informed me that the Japanese government had given cherry trees to Mexico, but they had died due to the hot climate, and so they were replaced with a hardier variety that closely resembled the original cherry trees. A very beautiful sight indeed.

And so we finally arrived. Turns out that the venue was at a large plaza, with the theater on one side and the library on the opposite side – not even a two-minute walk apart. Unfortunately, the building was unadorned – not even a banner to advertise the show that was being performed, and so I will simply place a link here:

entrance to the theater

The performance reminded me of the Mexican Ballet Folklorico, which, through dance, illustrates the history of the country. The dance company is now based in New York, as it is banned in the People’s Republic of China. Many of the dancers and their families are practitioners of Falun Gong, which is banned there, and in fact, the father of one of the principal dancers was imprisoned and tortured, and his mother is now in prison because they are practitioners.

Many of the dances were quite beautiful, as was the scenery – a skillful blending of the background with the live dancers. I couldn’t quite believe that a human body could do the flips and other acrobatics that they performed. In parts of the storytelling that depicted some of the brutality that people suffered with the 20th century government, I actually started to cry.

After the theater, we walked across the plaza to the library. On the way, there was a mini-amphitheater, which had a coffee shop under the stairs

The library was quite impressive, and could easily be mistaken for a museum. I couldn’t even fit the whole building into one photo

left side and entrance to the library 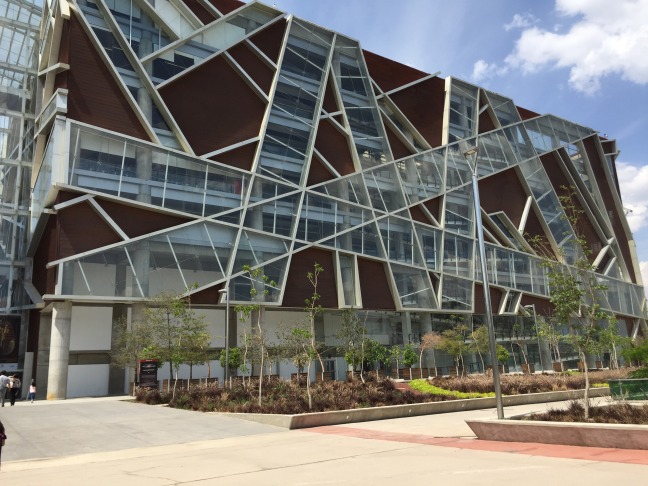 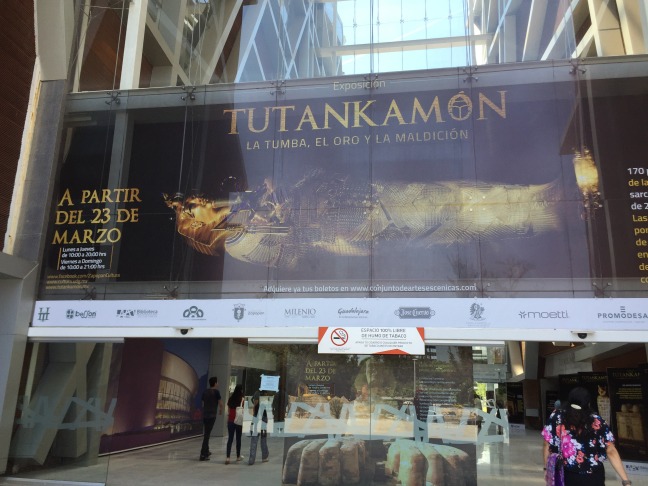 close-up of the entrance

Once inside, there was an artist’s rendering of what the finished plaza would eventually look like. You can see where the theater and library are located on the drawing. 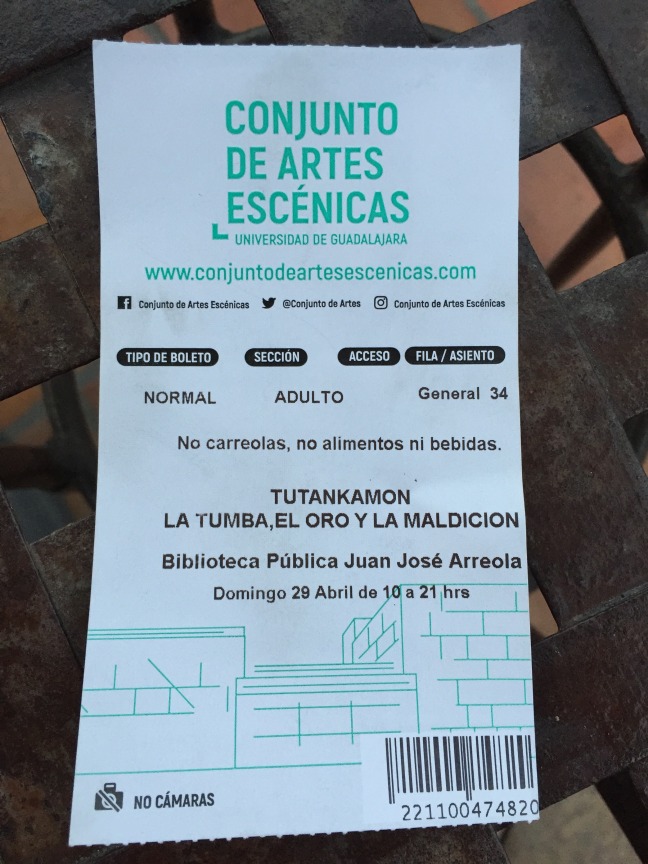 “Tutankhamen, the tomb, the gold and the curse”

The exhibits were amazing, including the outermost container for the multiple coffins of the Pharaoh – Tutankhamen. It was a cube, about 18 feet high. I had no idea that there were so many layers, like Slavic nesting dolls, before the final one in which his body lay.

So many artifacts, photos of the expedition that found his tomb, and a history of the curse that beset the excavation team. There was also a video demonstrating how the mummification process works.

Now, I’d been a nurse for 45 years before retirement, so very little phases me, but it was a bit stomach-churning to see re-enacted the process of sticking a long, thin instrument up a mannequin’s nose in order to scramble the brains. There were 4 jars which held the deceased’s internal organs, but nothing for the brain.

not sure what might have been reproductions and which the actual objects, but there was a display of this throne. 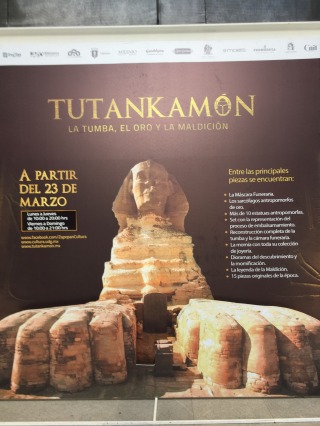 “Mummy of a cat” Bastet was the goddess of the cats. These animals were considered sacred and honored, and as a consequence, the practice of mummification was also extended to them.

I had heard once that cats were considered to be gods to the ancient Egyptians, and they never forgot it. Hence, their personalities.

Wandering around the ground floor and outside was a man dressed as King Tut. It was so hot out, I imagine he was extremely uncomfortable with the clothing and mask. His job was to allow photos to be taken with him in exchange for a donation, and so, of course, Claudia and I just had to take advantage of the opportunity. 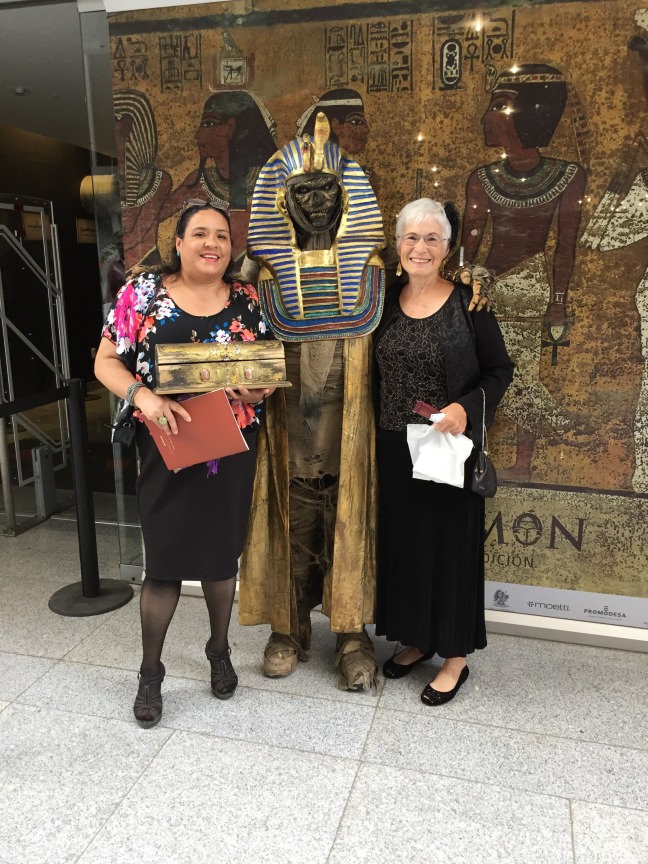 In front of the other side of the library was a giant statue of Anubis, the ancient Egyptian god of the dead.

And so, that ended our exploration of Ancient Egyptian and Chinese culture for now.  After a delicious seafood dinner, I retired back to my hotel, and Monday afternoon, I was back home.  And so, I bid a fond farewell to Guadalajara, but I will be back in the Autumn to explore the archaeological sites when the weather is slightly cooler just after the rainy season ends.