This whirlwind European trip was a 16th birthday present to my granddaughter, Brenna.  For years, she had been promised a trip when she turned 16. At first, she wanted to go to Australia, and I had already promised that she could pick the country to which she wanted to go. When she kept insisting on Australia, I told her mother that since half the cost of the trip would probably be the tickets, it would not be as many days as it could have been.

Then one day, I received a call from my step-daughter, Brenna’s mother. She said that Brenna was a big Doctor Who fan, and she had discovered that there were Doctor Who tours in the U.K., so Brenna then decided that she would rather go to the U.K.  And so, we were bound for Europe instead of across the Pacific to Australia.

It turned out that there were Doctor Who tours in two different cities – a bus tour and a walking tour in Cardiff and a walking tour in London, so I signed us up for all three. So off we went from Denmark to Wales via Amsterdam – two flights in a small plane that wasn’t pressurized as well as the larger commercial planes.

At altitude and more severely upon descent I experienced excruciating pain from my left inner eyebrow to my temporal-mandibular joint and behind my ear. I couldn’t hear in my left ear, and in addition I had severe low back pain to the point where I could barely walk. We made it by taxi to our hotel, where I learned that the local urgent care center was closed for the night but would open in the morning. I decided that I could wait until morning to go there, then had a room-service dinner.

In the morning, we took a taxi to the “GP” which is what they call their urgent care center and there I met the first doctor of today’s blog title. I was told that since I am not enrolled in the NHS that I would have to pay for the visit.  The cost of the visit was          40 British Pounds Sterling – about $52 USD.

The doctor gave me a thorough examination and I was prescribed Amoxicillin for my ear problem (bloody inside, pain and still couldn’t hear) and Tylenol with Codeine15/500 for pain. Went to the chemist (pharmacy), they charged me a little over 10 Pounds (about $13 USD), and then dispensed the Amoxicillin and a box of 100 (ONE HUNDRED) Tylenol/Codeine pills!!!!!  With all the controversy in the United States about prescription pain medication abuse and addiction, I couldn’t believe it and said I would only need about 4 pills, but the one hundred was what was dispensed.  I did end up only using 4 pills, and gave the rest to a doctor to donate to a hospital or clinic.

While I rested and recovered in our room, Brenna walked around Cardiff, and visited a fair that we had not heard about before we arrived. I admired the view from our balcony, which was right on the harbor, looking out onto the water and at a family of swans who swam daily among the lily pads. 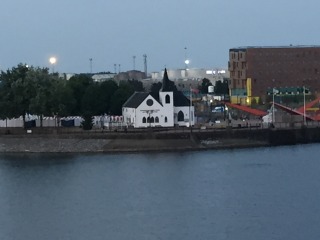 I also decided to take advantage of their lovely afternoon tea. I had a great seat by the window, was served my choice of tea and a nice assortment of cakes and sandwiches. 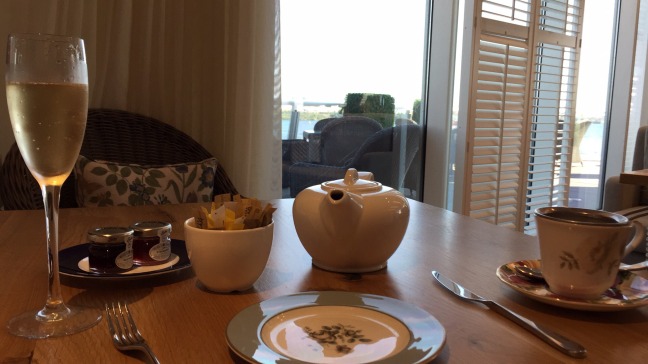 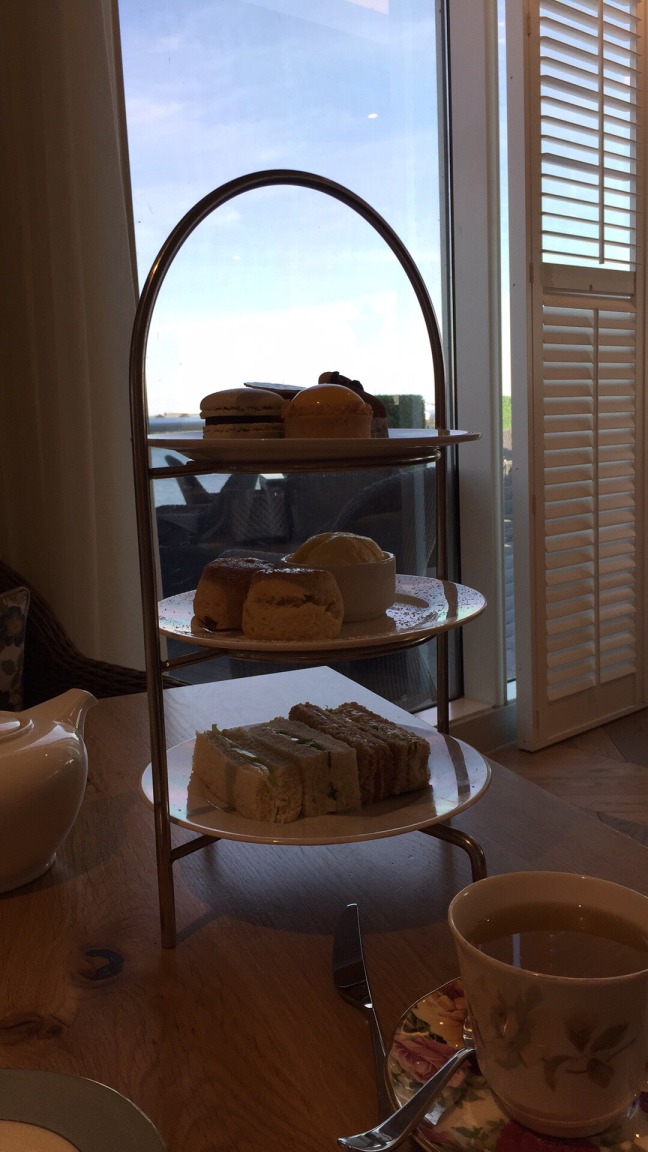 In the morning, I definitely wasn’t up to taking a walking tour, and so called the organizer, Brit Movie Tours, to see if they would allow Brenna to go by herself, since she would be with a group of people. Since she was not 18 years old, they said no, so we had to skip the walking tour, but we DID take the bus tour. There was some walking involved in the bus tour, but the tour guide said I could remain on the bus for those parts

We met at the Millenium Center, and she was quite easy to spot, as you can see from her photo (hint: it’s her dress that gave her away).

The Welsh written language seems to have a lot of “w’s” and “y’s” and not too many vowels.

The Millenium Center with its copper-colored roof 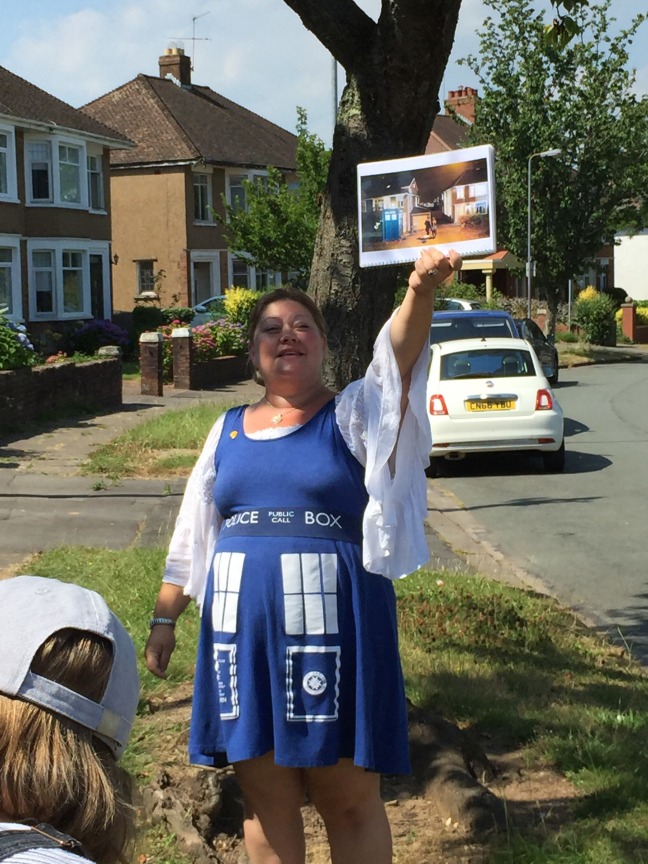 The bus would stop at designated spots and our guide would hold up photographs of scenes from Doctor Who, indicating that those scenes were shot where we were standing at that time.

At one point, we stopped at the bottom of a hill and all the other passengers disembarked to climb the hill, but I remained on the bus and rode up to the top. There I found the ruins of a cathedral. 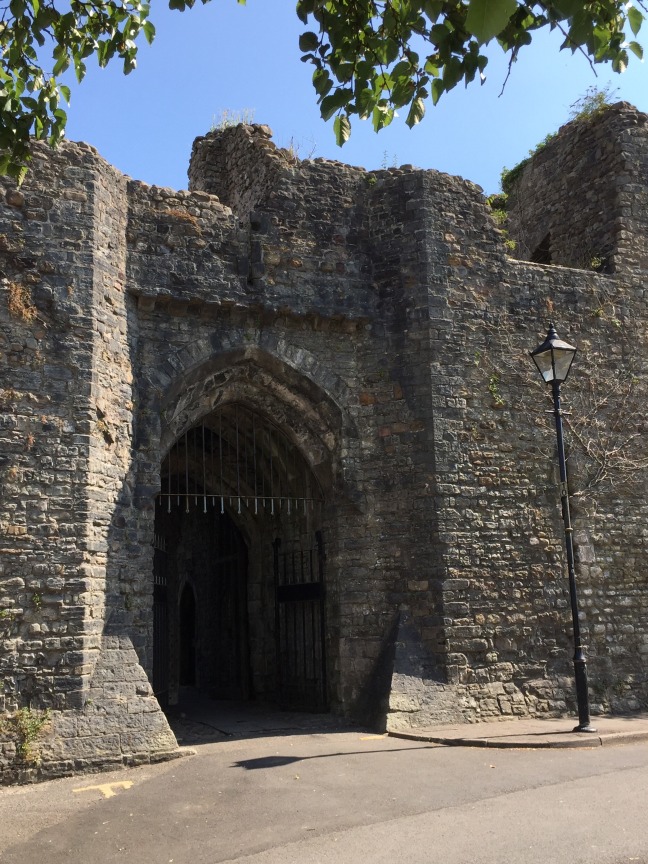 and a war memorial

We also stopped at a mill in which wheat was ground. 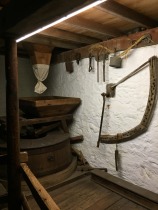 After the tour we wandered around the harbor and attended the fair, which included tents with many types of food and crafts. And the next day, we continued wandering about, exploring the areas around the harbor. 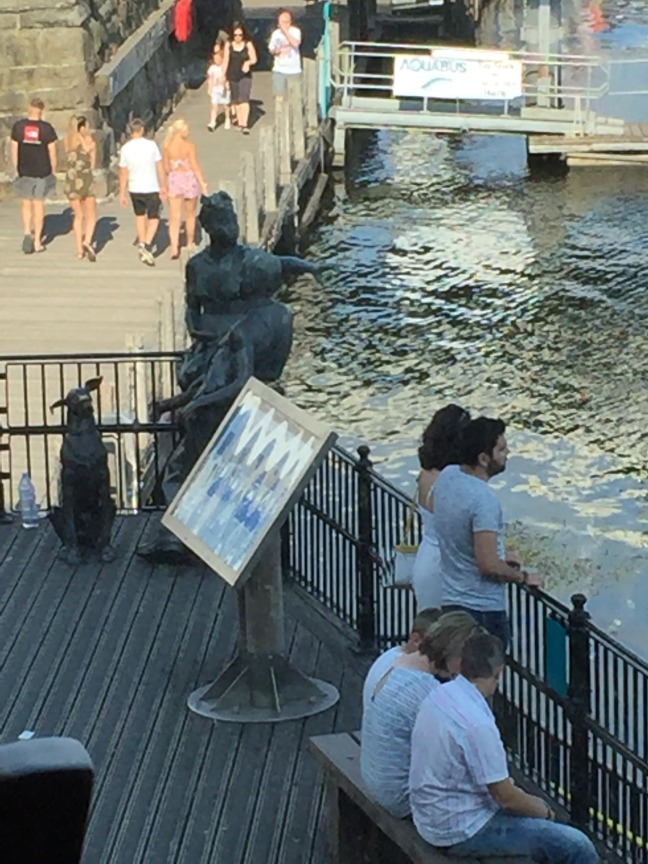 Brenna relaxed by going to the amusement park that had been set up, going on many of the rides while I relaxed in the shade. We then continued on our way, looking for a restaurant in which we could have dinner, and stumbled upon Ianto’s Shrine, from a spinoff of the Doctor Who program. 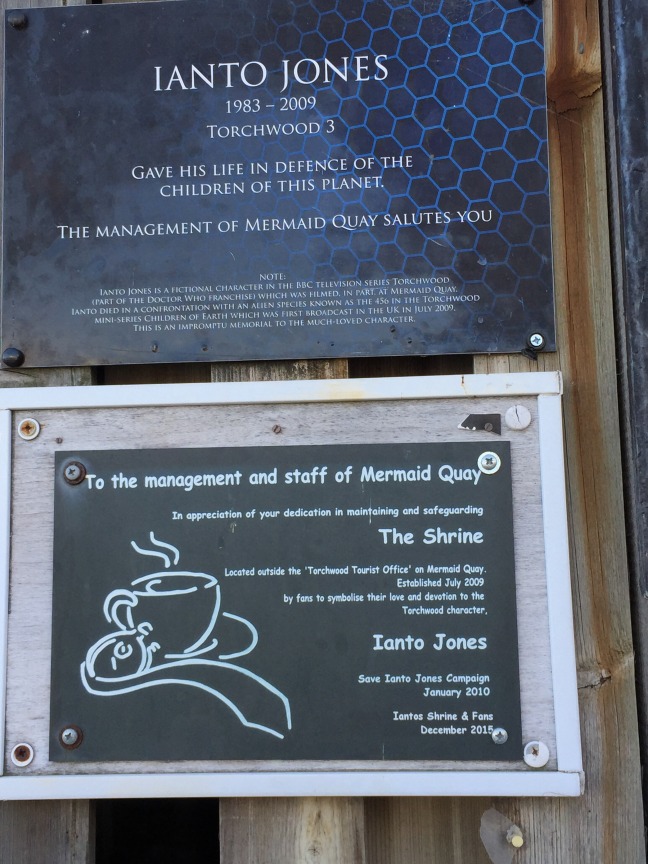 and then stumbled upon another Doctor Who landmark, the American Diner in which some of the scenes took place: 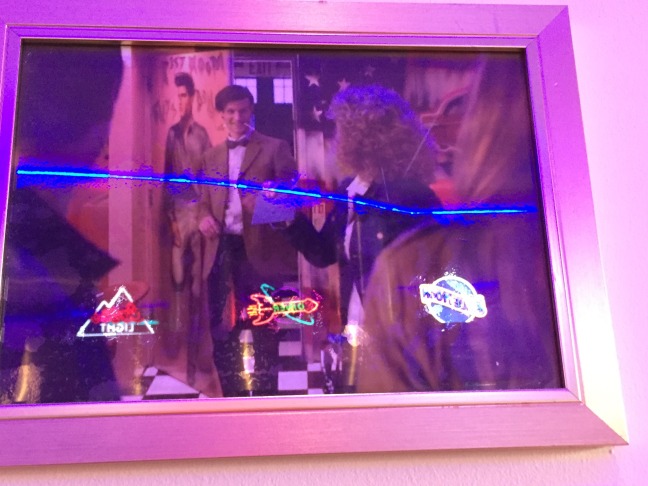 photograph of the actors in the diner

the booth in which the actors played their scene 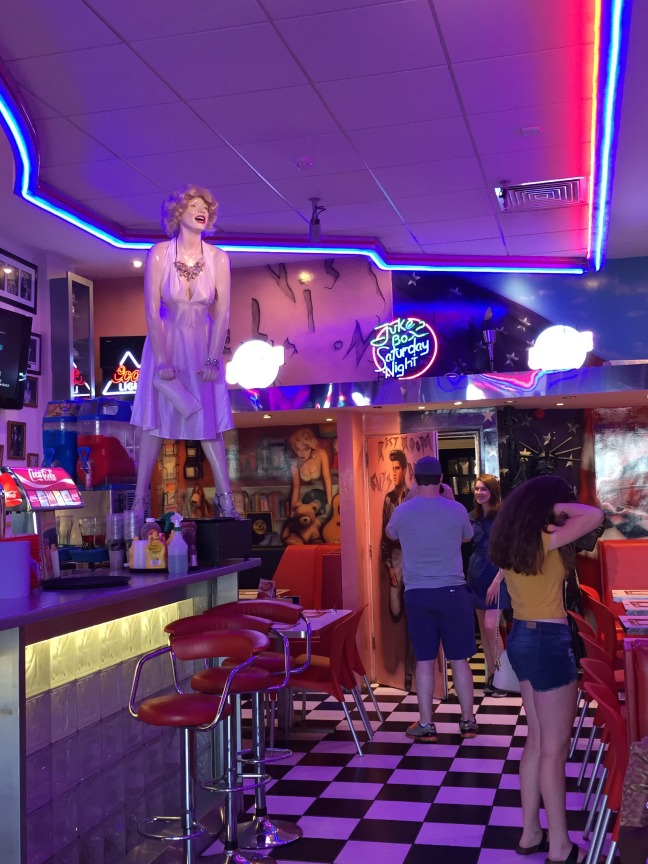 Our final night, we returned to a restaurant on the waterfront where we had had dinner the night before. The food was excellent, and the staff was very friendly, so we decided to eat there again and were not disappointed.

Since we had a 7am flight the next morning, and had to leave the hotel around 4am to make the flight, we packed out suitcases and went to bed early. Ireland would be our next stop with nothing in particular planned – so we were going to have 4 days to chill out after long plane rides, 5- and 6-hour time zone changes and zipping from one country to the next.

One thought on “Cardiff, Wales – A Tale of Two Doctors”