Our next stop on the Irish section of our European adventure was the current Kylemore Abbey, conceived by Mitchell Henry and his wife Margaret and built as Kylemore Castle. Construction was begun in 1867 and completed in 1871, putting 100 men from the surrounding area to much-needed work.  Mitchell not only wanted a grand home in which he and his family could live, but he also wanted to help out the community, which was suffering greatly from the Great Irish Famine.

And so, he built this wonderful castle, complete with 70 rooms and modern innovations such as hot running water. 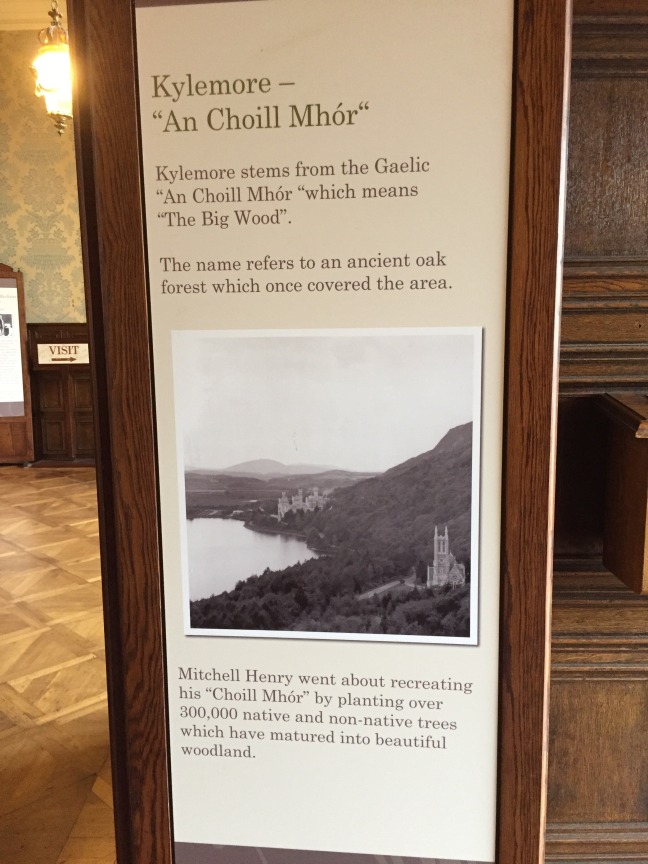 It was elegantly furnished, as one would expect of homes of that era. 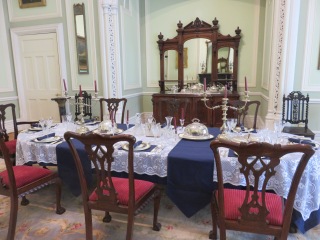 I am always amazed when I see such estates, and cannot imagine what it must have been like to live in such surroundings. Included on the grounds of the estate was an enormous walled garden with a home for the caretaker and many glass hothouses. 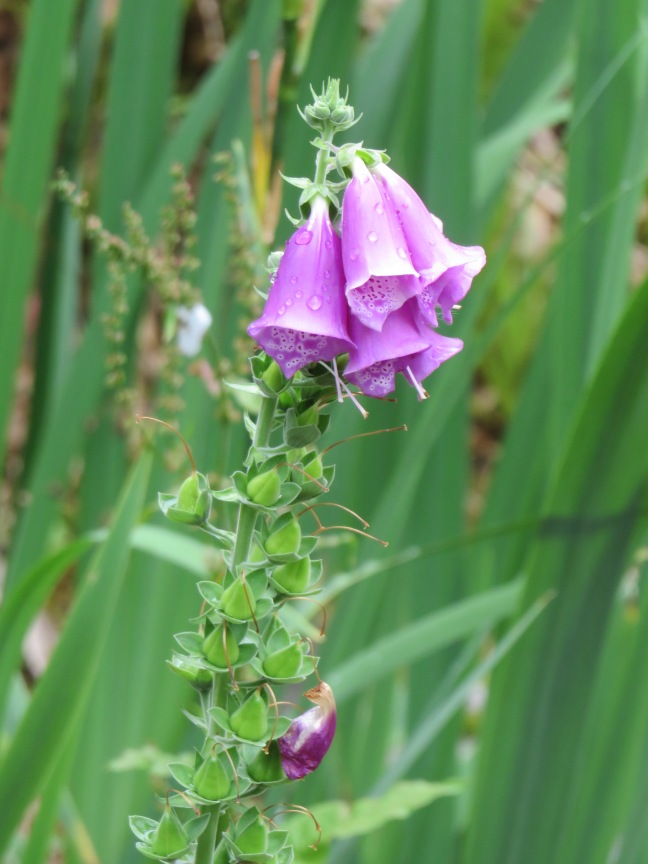 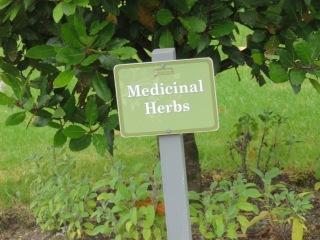 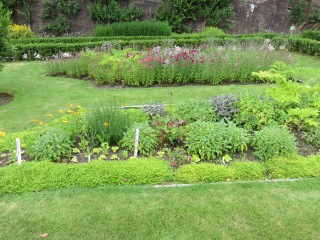 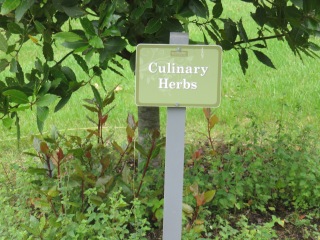 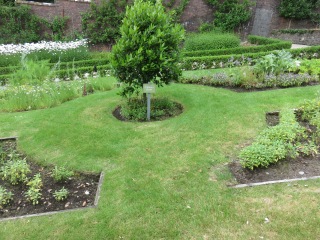 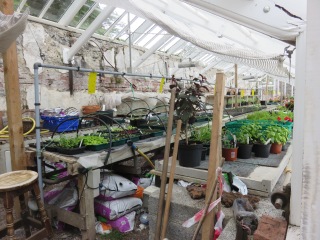 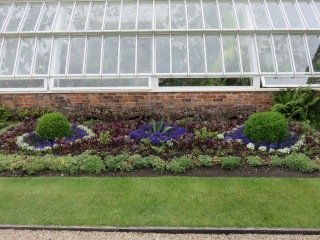 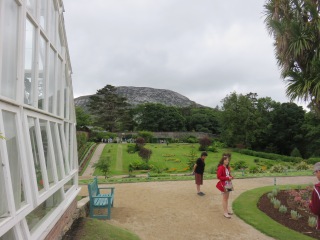 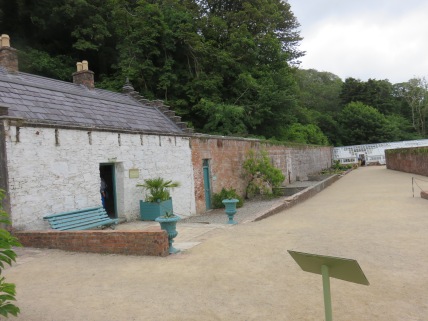 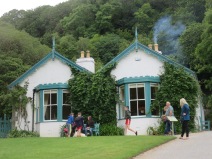 Along the path from the Abbey was a sign for The Ironing Stone (Giant’s Wishing Stone), and as we walked, we kept searching for it. Finally we reached the end of the property, turned around and headed back to the Abbey. And – we found it ! I realized that on our way out, there were some visitors standing near what I had thought were just wooden poles that had been put into the ground. Now that we were headed in the other direction and there were no other tourists around, we realized that what we had thought were only posts were actually the “fingers” of the “giant.” 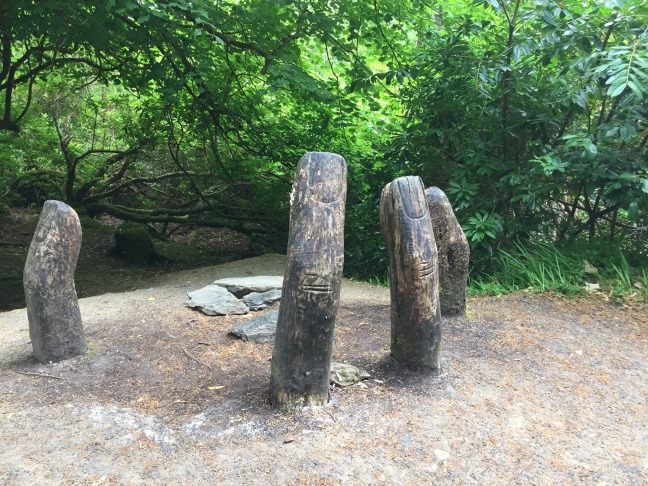 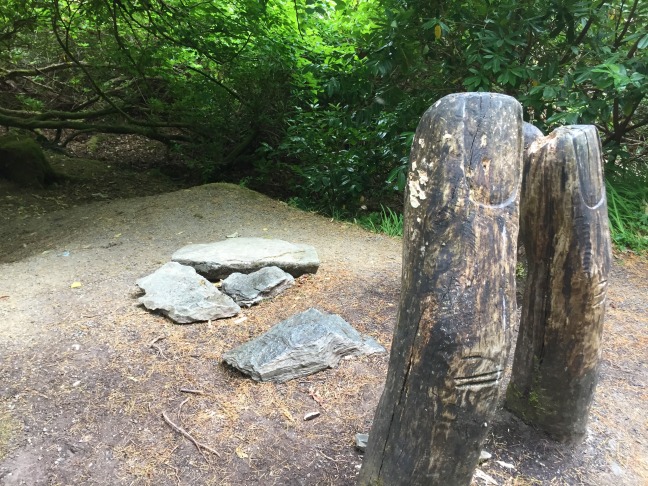 Tragically for the Henry family, Margaret died from a fever contracted while visiting Egypt. This happened only four years after the castle was completed. In her memory, Mitchell had a church built on the grounds in her memory. 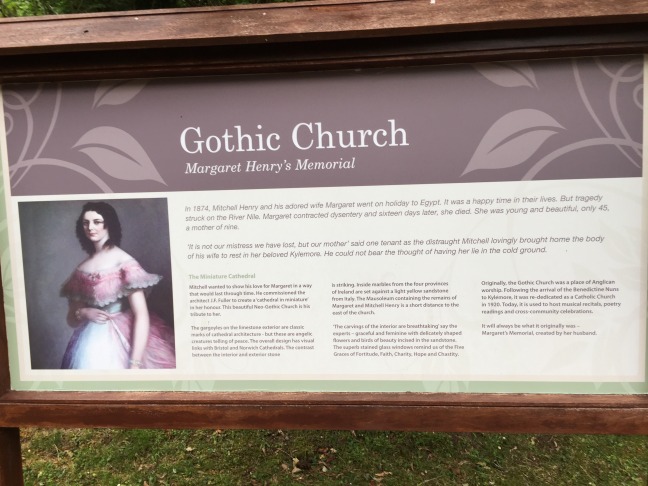 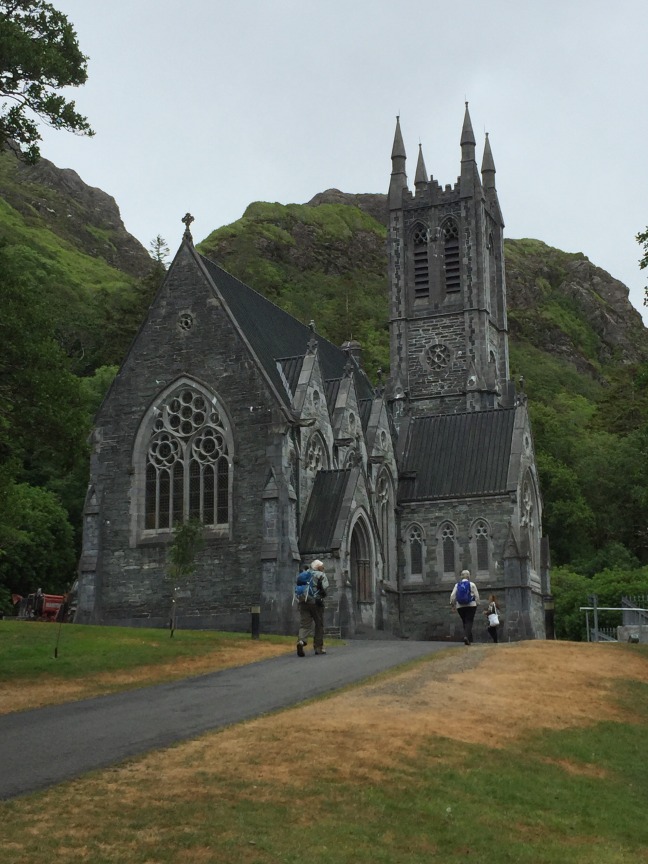 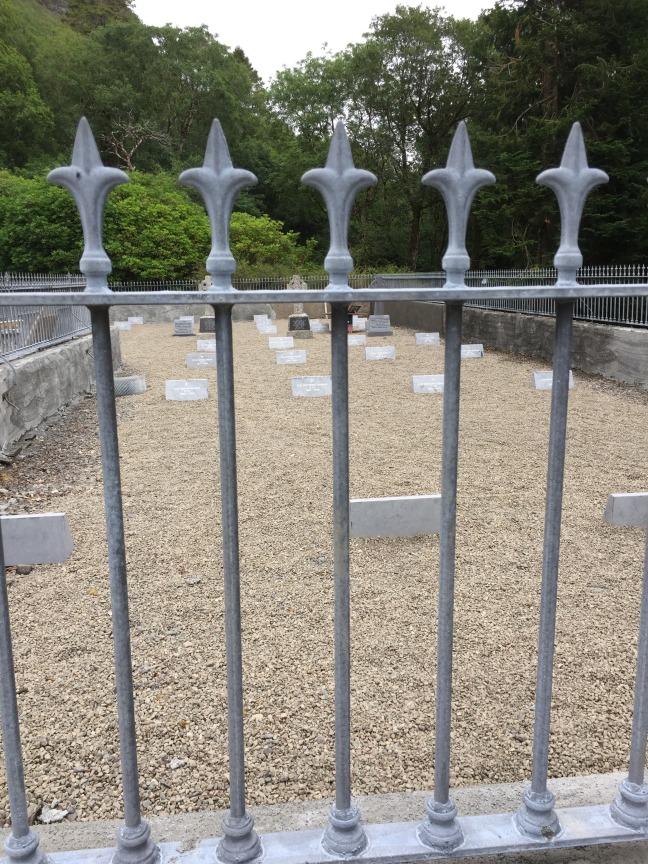 and the mausoleum containing her body was nearby 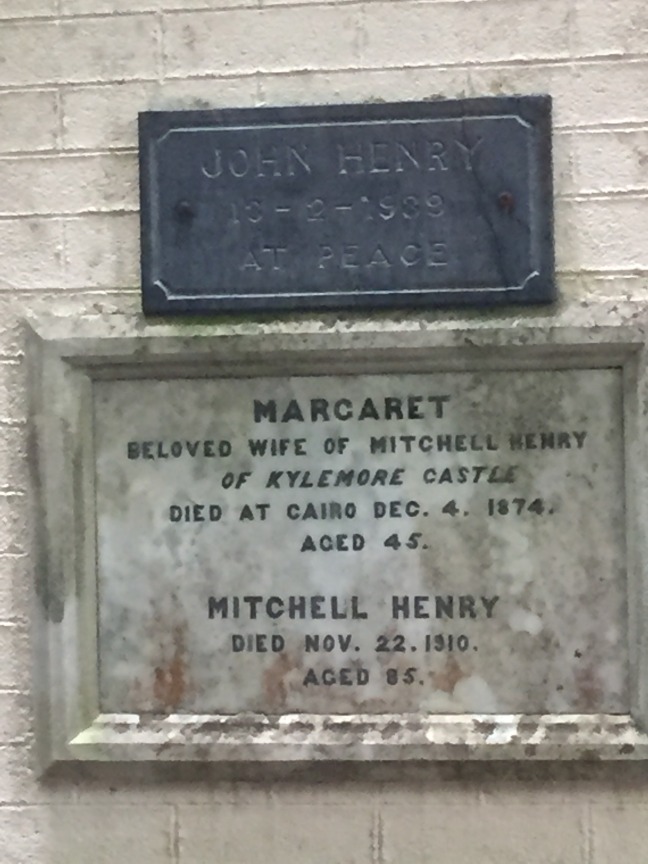 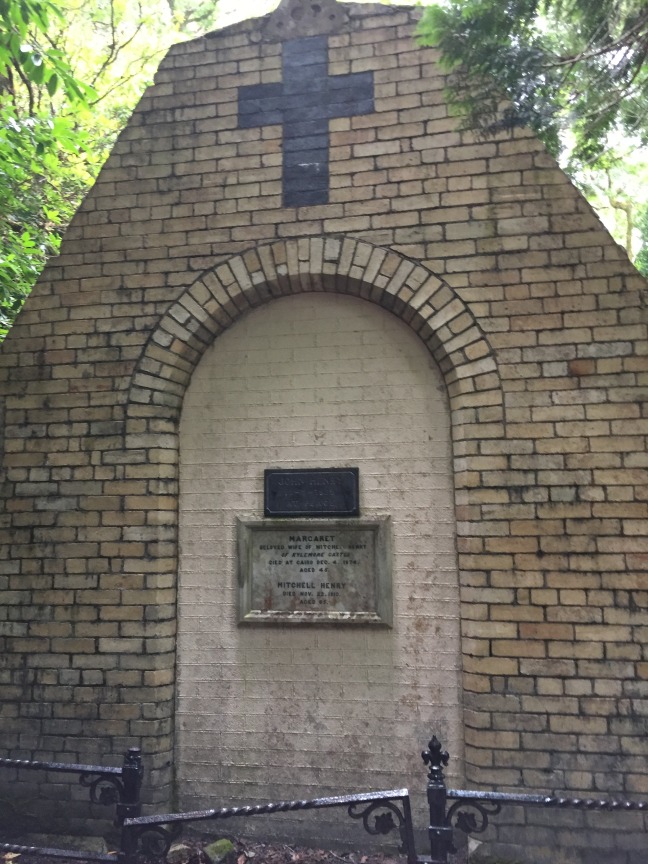 In 1903, the castle was purchased by a Cincinnati oil baron for his daughter as a wedding gift for her marriage to the Duke of Manchester. She went about “modernizing” the castle, removing some of the wood and stained glass. I believe I was told on the tour that these parts of the castle were not discarded, and eventually the Duke lost the property through his gambling. 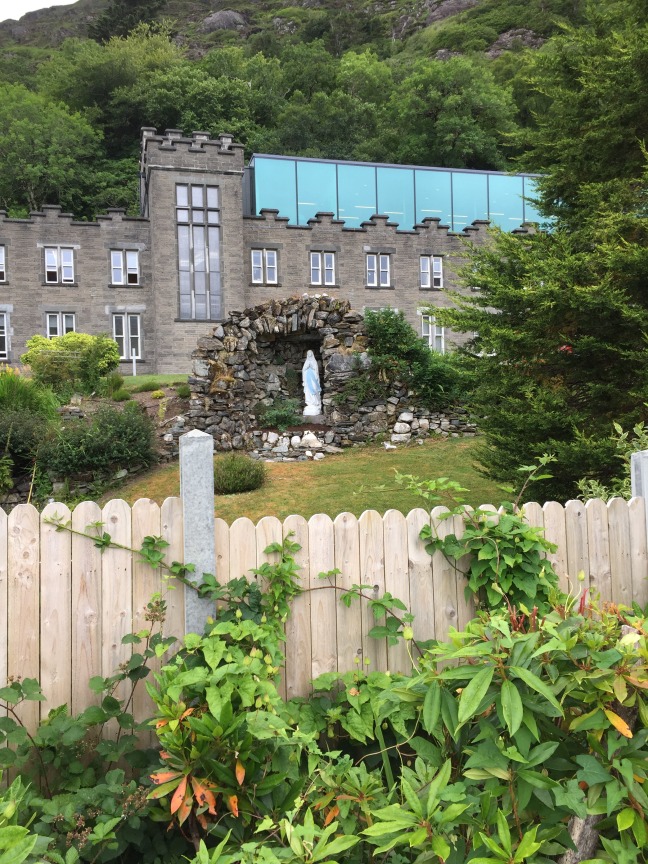 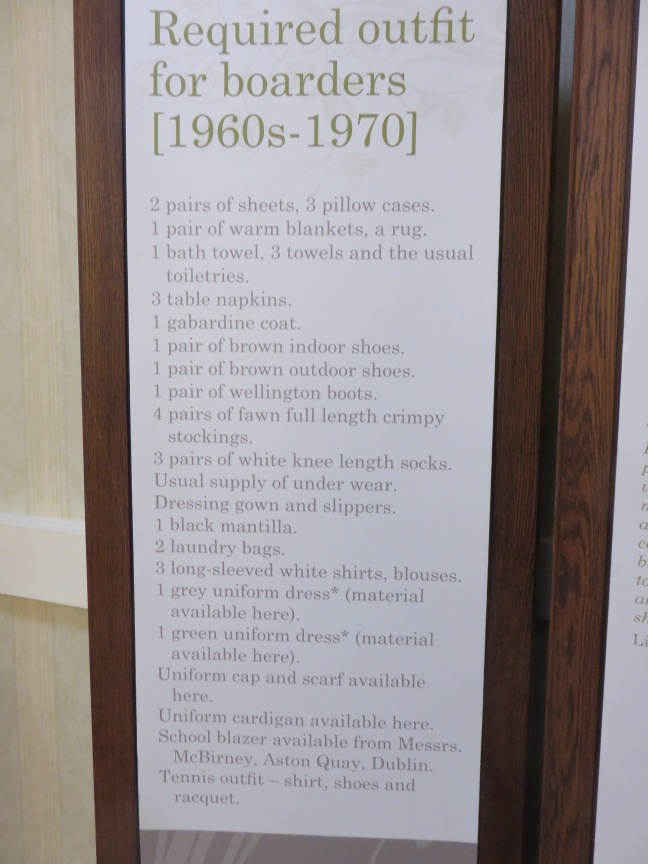 The nuns had fled from their abbey in Ypres, Belgium during World War I,  and in gratitude for their safe arrival in Ireland, erected a statue of Jesus on the hillside near the abbey. 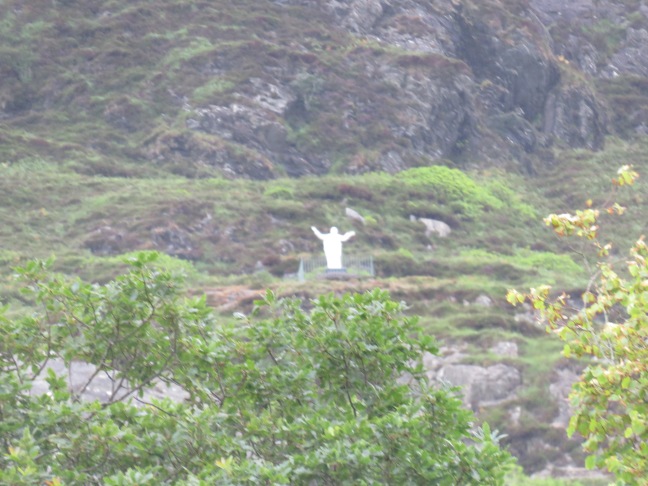 You can read more about their history here: 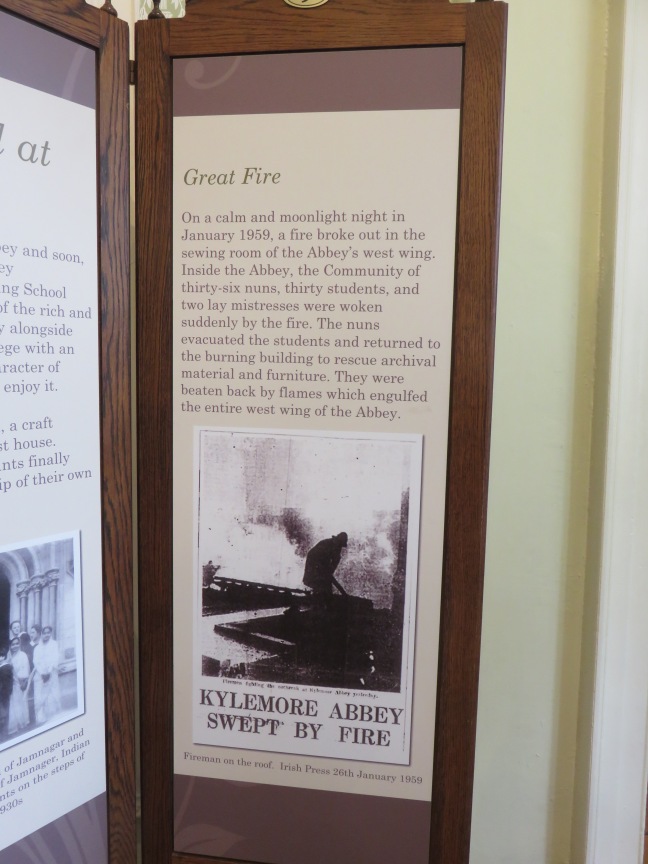 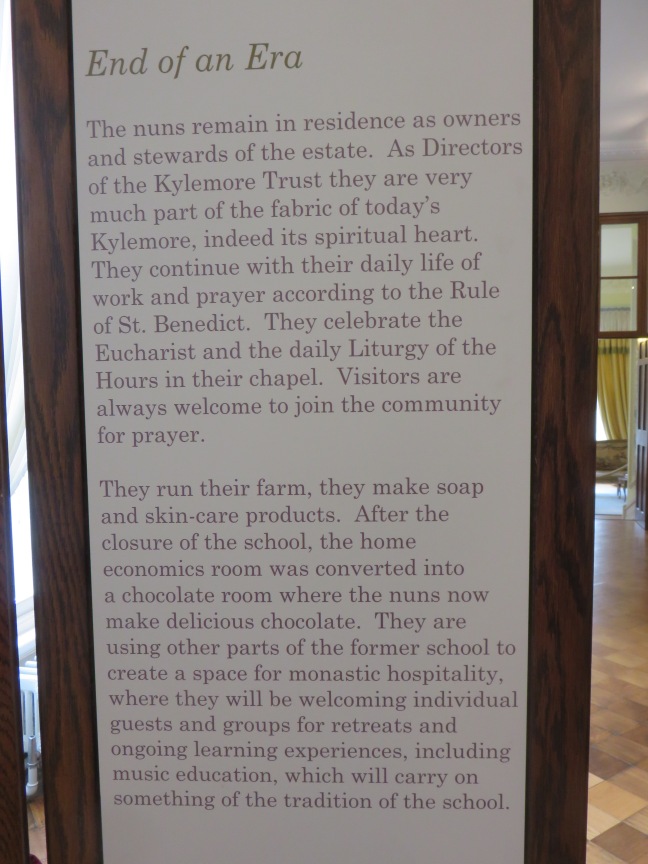 And so I am at the end of my narrative about our visit to this beautiful historic site in which the nuns continue to live and care for the property.  With nothing more to say, I will leave you with a few more photographs of this tranquil place: 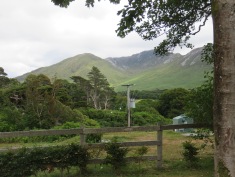 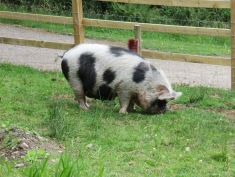