When people think of Mexican culture, one of the most common themes is La Catrina and Day of the Dead. La Catrina is depicted as an elaborately dressed skeleton, and does in a way exemplify Mexican thought about death. The skeletons are not scary figures as they are in the United States, but reminders of loved ones who have departed.

However, the Calaveras began from quite different circumstances, which you can read about in detail here: http://www.mexican-folk-art-guide.com/catrina.html#.VvINVEfTXIW

Initially, it was satire, creating drawings of skeletons to represent politicians, celebrities, or others in situations to make fun of them. Then in 1888, Jose Guadalupe Posada created la Calavera Garbancera, which later became La Catrina. In spite of censorship, he was able, through his character La Catrina, to poke fun at politicians and describe injustices in a safe way.

The Catrinas (catrin is slang for a well-dressed rich person), were actually making fun of the elaborate dress of the rich, with their faces covered in make-up.  The heading of the newspaper article in the link states, “Those garbanceras who today are coated with makeup will end up as deformed skulls.”

Even so, La Catrina is now inextricably linked with Mexican culture and the Day of the Dead…. 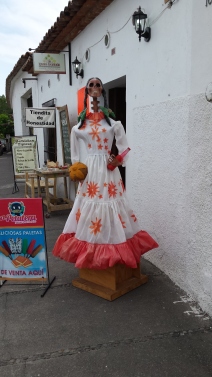 Outside a store in Comala

My personal Caterina, elaborately dressed in white, like a bride