Easter has come and gone, and I posted about Easter, complete with videos, last year. The story will be in the archives of this blog, if you care to see the celebrations and weren’t following me at that time.  After Easter was a celebration in the jardín specific to Cofradía de Suchitlán. There were vendors selling food and drink, speeches were made and poems read about the people who founded the village and were important in its history.  I recognized a few of the names, but my Spanish wasn’t good enough to understand the details and nuances, and I am not familiar enough with the history to understand the references about each of the people named.

There was also a dance troupe from Suchitlán – a different village than Cofradía de Suchitlán.  They had different colored costumes than the Cofradía dance troupe (Danza Azteca de Cofradía) but performed the same pre-Hispanic/pre-Columbian dances.  I was also impressed with the man who provided the music; he played the flute while simultaneously beating the drum, and he did this while walking around and through the dancers.

After the dancing, a group of men performed the ritual of the Paspaques. This was already performed throughout the streets on the Tuesday before Ash Wednesday – our version of Mardi Gras. It originated in pre-Hispanic times, and the word “paspaques” comes from the Náhuatl word papaquiliztli which means happiness and joy.

The mission of the gang of paspaques is to enliven the carnival with games, and the carnival in ancient times was to celebrate the coming of spring and rebirth of nature. Part of the ceremony is an effigy of a bull, which “runs” and tries to hit spectators and the gang with its horns.

Another part of the ceremony, in ancient times, was that the gang would go to the house of the Prioste (the steward of a brotherhood or confraternity) where they would do an offering of a song and offerings to different deities. If the wife of the Prioste was pleased, she would paint their faces with pinole (ground roasted corn), distribute gifts and then they would all eat stew.

There was flour on the faces of the performers, but they did not throw the flour at us, as they did the day before Ash Wednesday.  Unfortunately, I also have no idea what they are singing. Perhaps if I play this back enough, I will be able to understand most of the words…

Finally, at the end of the evening was the fireworks – after all, this IS Mexico !!  A rope was strung across the jardín from which an effigy of a man was suspended, surrounded by a frame of fireworks. The man was in a suit and had a piece of paper visible in his jacket pocket.

We were all ushered away from the effigy and the fireworks were set off, and nothing was left of the poor “man” in the end. My friend Gloria explained to me that this represented Judas. In olden times, he was wearing biblical dress, but these days he was dressed in modern clothing.  The story Gloria told me is the note in his pocket represents a note that he wrote before he hung himself after betraying Jesus. I suppose the fireworks represent his destruction. 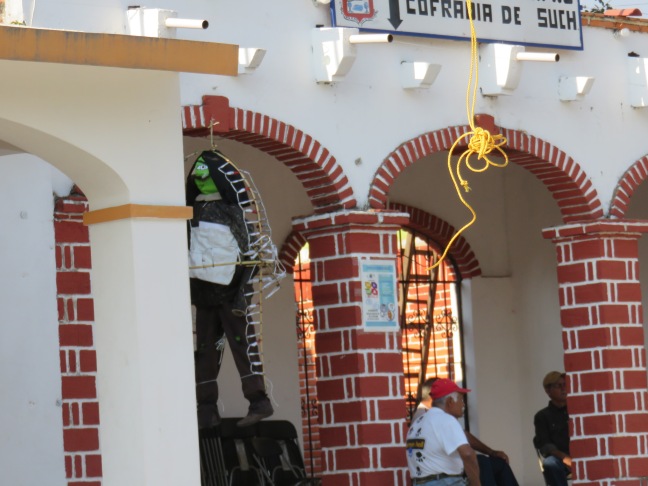 And so ends the celebrations. Good night to all and to all a good weekend !!!