One of the joys of working the land is having a vision of what it will look like in the future, much like an artist creating a beautiful picture from a blank canvas. I knew I wanted chayote vines, and so a part of the land was cleared, the chayotes were put into the ground, and from there, the vines grew.

Likewise with my herbs and my moon garden. However, there is a rectangular piece of ground on the outer part of my brick wall, and I had no idea what to do with it. Choked with overgrown weeds, surrounded by a chain link fence topped with barbed wire and surrounded at the base with a low cement and rock wall, which had broken apart and had partly fallen into the road, it was ugly to my eyes but I was at a loss as to what to do.

There was no drainage system within it and it had no door with which to access the inside of my property. It wouldn’t be easy to water if I should place a garden there and there are no electrical outlets, either.

A neighbor suggested placing a door there, but I really didn’t want to do that. While discussing the situation with my friend Ted, he suggested I place a Virgin of Guadalupe there, and as soon as he said it, I knew he was right.

The Virgin is the patron saint of Mexico. Her statues are everywhere. Her feast day is December 12th, and other than that, each local village has its own specific week to celebrate, with a week of festivities culminating in the Castillo, a large tower covered in fireworks, set off one stage at a time.

And so began the process of creating a special sanctuary out of this piece of property, and it really did take a village. I liken Cofradía de Suchitlán to Museum Village in Orange County, New York, or my father’s stories of growing up in the Bronx, NY during the depression ( http://www.lepanto.com/ryan/ripple.letters/ ) – a small town where everyone knows everyone else and each person and artisan has their own specialty.

The first order of business was to repair the part of the stone and cement border that had broken off and fallen into the street. For that we hired Rogelio, who was able to break up the part that had fallen away and re-cement it back together.

The gardener Ángel then dug out all the saplings and weeds from the ground and applied fertile earth which I obtained from the worm farm outside the village. Ángel and Rogelio felt that stairs were needed, since the top of the wall was pretty far above the ground, so bricks were laid down and covered with cement to make stairs – the bricks being obtained from the local brick maker. 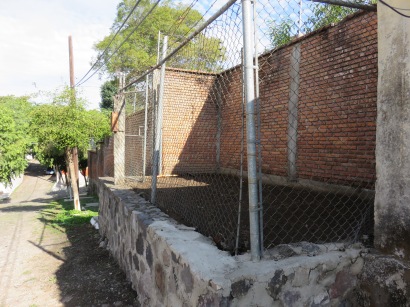 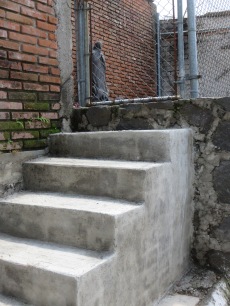 The next task was to have the Virgin carved. My neighbor Lourdes stated that she knew someone who carved stone, José who lives in Cofradía and works in the next village of Nogalera. We visited him and decided on a statue made of black volcanic rock, which he would be carving by hand, and so it was arranged.

Now I also needed to plant something in the bare earth, but I wanted ground cover instead of grass, and once again my friend Ted came up with a suggestion. He has on his property Wandering Jew plants, and offered to give me some of them, so Ángel set about bringing them over and planting them.  Their green and purple colors would contrast nicely with the volcanic rock.

And so, the ground was readied, the stairs were constructed and in 3 weeks, the statue was ready. José arrived with 2 other men, and even with the 3 of them and Ángel working together, it was extremely difficult to lift up the statue, and so they had to back up the pickup truck to the lower end of the space (the side opposite from the stairs) and dismantle part of the chain link fence. They also realized that the statue needed a base, or it would sink into the earth, so a suitable rock was found on which to place her. 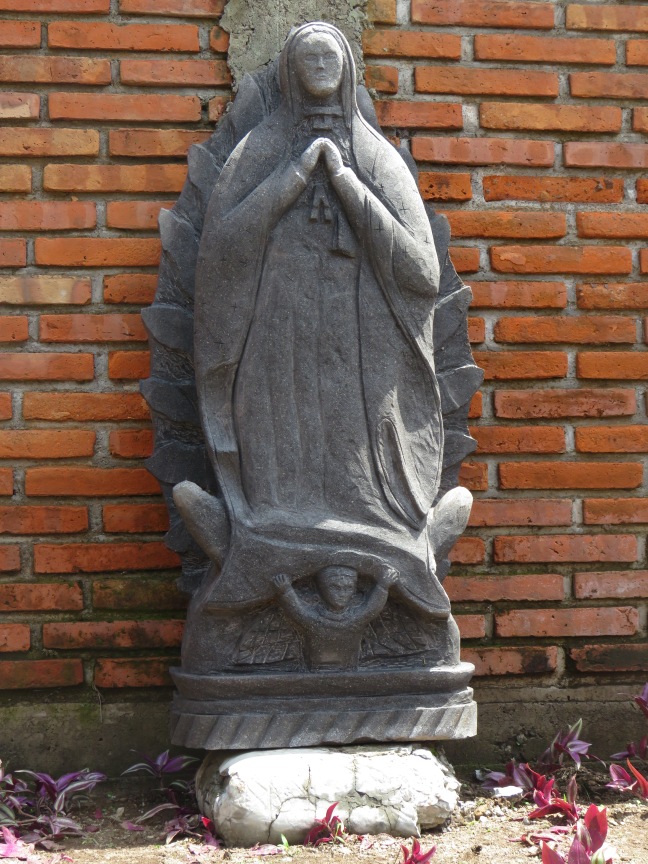 Of course, a more proper base was needed, so Rogelio was asked if he could construct one. In addition to that, a roof was needed to shelter the Virgin from the rain to protect the rock from weather damage, since the rainy season lasts about 5 months out of every year.

For that purpose, we contacted Chencho, who had previously helped me by shaving the bottom of my sliding metal gate, enabling me to open it more easily, and also sharpening my machete, as I had been unaware when I bought it that the blades are sold blunt and needed to be sharpened after purchase.

In any case, he created a metal frame, after which a laminate roof was placed over her head.

So Rogelio made the cement base with Ángel’s help, and 5 flowering plants were purchased and planted around the statue. Two solar floodlights were also placed on either side, and now all we needed to do was to have the dedication, or inauguracíon.

For this, Lourdes gave me a Rosary to place on the statue and I purchased two vases with white roses. Ted also pointed out the ugly cement post in the wall, and sent someone over to cut it down with a saw just one hour before the priest arrived. And so the priest, Father Gamaliel, came and said prayers and applied holy water to the statue.

I had invited all my neighbors,  so there was a crowd of about 25 people. After the prayers and benediction, we retired to my garden and for iced tea, soda, fruit and cheese and pineapple cake to celebrate the culmination of this village project to help beautify a small part of the neighborhood… 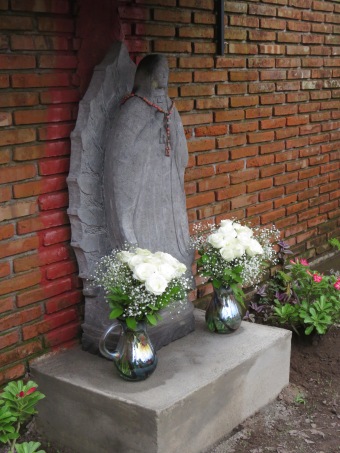 And so ends my story for now. Wishing you all a wonderful week, and see you next time…

One thought on “It Takes a Village – My Virgin of Guadalupe”