Many years ago, during one of my travels, I had a conversation with a woman who happened to be from Denmark. She told me about an annual celebration in the town of Rebild. She said that this was the only real American 4th of July celebration outside of the United States. All these years since that conversation, I had been telling myself that one day I would spend the 4th of July in Rebild, and now I saw my chance to actually do it.

Knowing that my granddaughter’s family usually celebrates together, I asked Brenna if she would care to celebrate this holiday in Denmark, and she seemed happy to do that. And so I started to make plans, did an internet search and found the Rebild National Park Society, located in Illinois.  Upon seeing the schedule of events on the web site, I decided to obtain a membership for myself and my granddaughter so that we could attend all the events including a formal gala (Yaaaayyyy!!! Brenna gets to wear her prom dress more than once!).

I called Linda Steffensen at the Illinois office, and she told me that the Rebild Bakker Hotel is across the street from the hills in which the events are held, so I booked a room there, and all was well.

We flew to Aalborg via Amsterdam, having only 15 minutes in Amsterdam to go from Gate D90 where we arrived to Gate B30 where our connection was. It was a LONG distance, and Brenna is on the track team, so I had her run ahead to make sure they didn’t leave without me.

The Rebild Bakker Hotel turned out to be a sports hotel surrounded by fields and trees. There was hiking, bicycle rentals, swimming pool,  everything regarding this hotel had to do with sports and exercise. The stairs were even marked with how many calories you burn with each step! 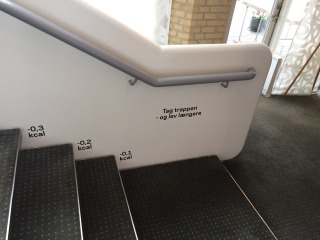 “Take the stairs and live longer”

During the day, I did our laundry, but needed the help of the receptionist to figure out how to use the machine. I had never seen so many settings before.

We then went to a luncheon, with mainly older Danish people. I discovered that they really like to sing and drink. We would be eating and talking, then someone would propose a toast, we’d take a sip and then we would sing, in both English and Danish, a process which was repeated at least half a dozen times during lunch.

They have a very strong drink called Akvavit. It was like tasting fire – much stronger than tequila.I could only manage to raise my glass and take a tiny sip. The songs were very old-fashioned to me – for instance “Yellow Rose of Texas” and “My Darling Clementine” which to me are also very depressing when you listen to the words, but I thoroughly enjoyed the song about Akvavit. 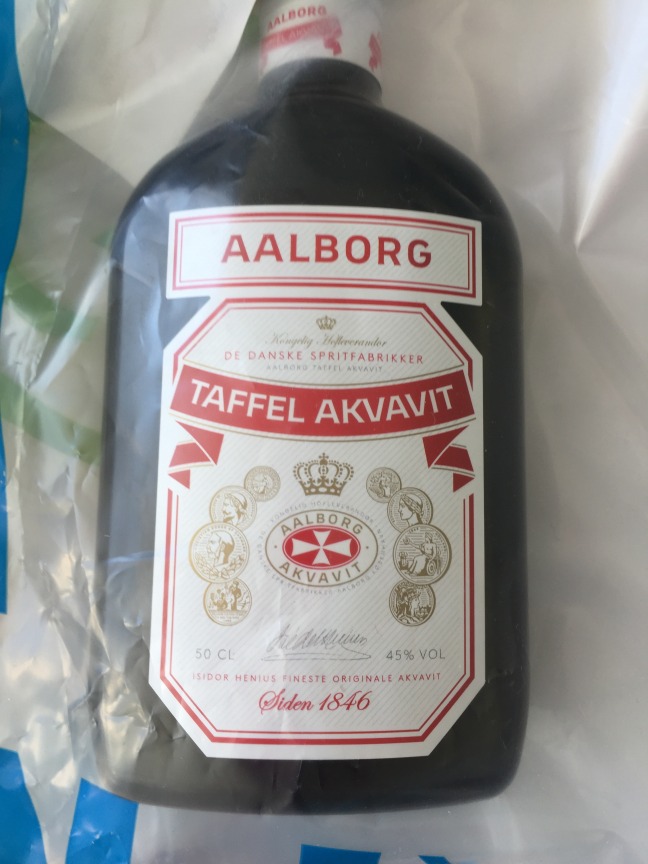 words to the song in English

Link to the melody. It says “Melodi: Oppe pa bjerget” (up on the mountain) and the link  above  is to that song, but the melody is also the same as the more familiar song

“I See the Moon and the Moon Sees Me”

“Snaps” is their word for this drink, and perhaps it is the equivalent of the German schnapps. I don’t know for sure as I’ve never had schnapps. Anyway, that bottle you see is one that I bought at the Aalborg airport when leaving Denmark. When we got to Cardiff, they wouldn’t ship that strength of alcohol to the U.S., so I ended up bringing it to New York when we returned to Brenna’s house. U.S. won’t ship alcohol either, so, since it was for my son in Colorado, someone will have to visit him and bring it in their suitcase……

Anyway, back to Rebild. We sat next to some very nice Danes who were surprised that we have absolutely no Danish ancestry. They were surprised when I told them how we had come to know about the festival and decided to attend, and I promised to write all about it in my blog, so that maybe other non-Danish or non-Danish-Americans would learn about it and attend.  Apparently it is a very famous festival to celebrate the opportunity Danish immigrants found in the United States and many presidents have attended in the past.

During the lunch the “Top Karen” Prize (“Top Karens Pris” in Danish) was awarded. This prize was begun in 2002 to honor the person who has contributed significantly within the Danish-American community in the U.S. in general and in behalf of the Rebild Society in particular.

Top Karen (Karen Marie Andersen) and her husband Top Jens opened the first coffee house in Rebild, originally only selling boiled water to tourists who brought their own coffee beans, and with time gradually expanded her business. Her house on the grounds is called “TopHuset” and as you can surmise from the name of the prize, Top Karen became  quite beloved in her community.

Besides the hills, an office and the yellow TopHuset (Top Karen’s and Top Jens’ house) there is a sculpture garden on the grounds: 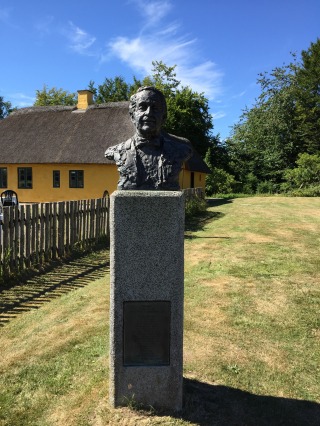 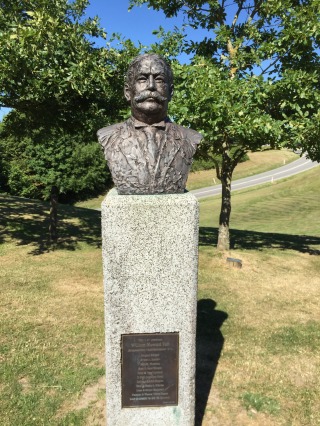 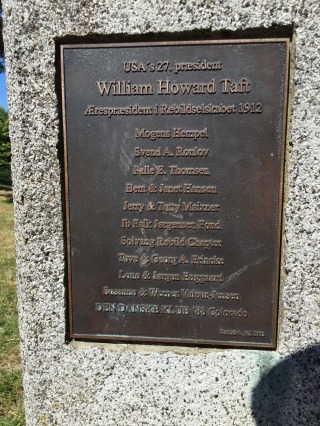 bust of Jens Toldstrup, a leading figure in the Danish Resistance in WW II 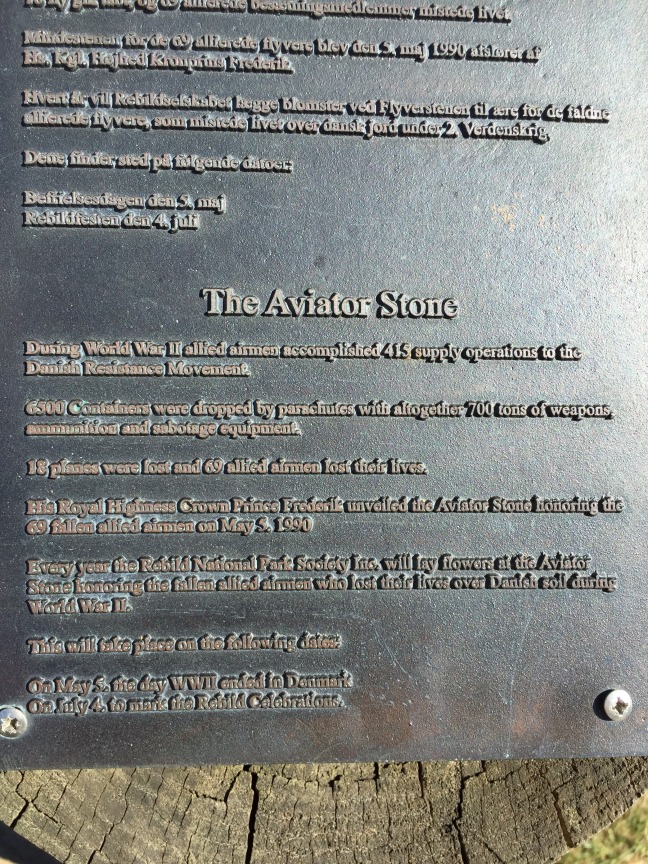 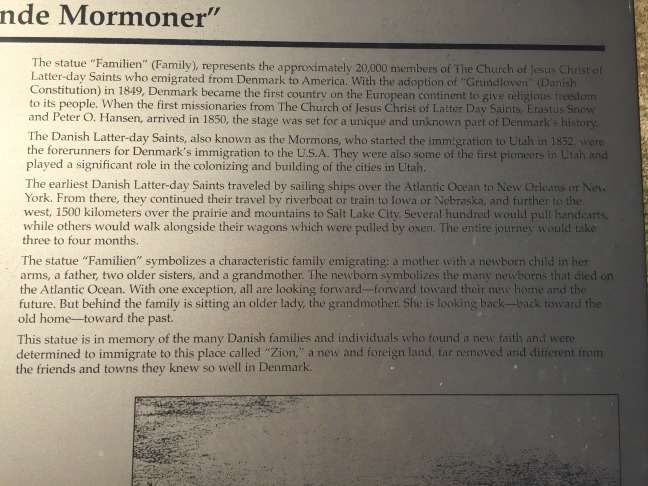 I WAS planning to write up the whole four days in Denmark in one post, but I fear this is getting overly long. So much happened in those 4 days, that I think it is better to break the story up into two or three posts total. Consequently, I will end this post here, having covered July 1st and 2nd, and continue with the events of July 3rd, and maybe the 4th tomorrow.

Meanwhile, if you have any questions or wish me to expand on anything I’ve mentioned, please leave me a comment.

Take care, and see you tomorrow!