The rainy season has started in this part of Mexico. Lots of rain with periods of sunshine and clouds. The temperatures are somewhat cooler, the air is fresh and the landscape is becoming a beautiful green.

We need to become careful where we step, not only because of puddles, but also because of the wildlife.  In New York, the sidewalks would be full of earthworms after the rains. Here, it is huge brown toads. About a week or so ago, we saw several dead brown toads in the road, one of which was ever more bloated each passing day. I don’t see it anymore, so I am sure it must have exploded at some point…

My foot has healed and in the mornings Lourdes and I have been walking on the paved road – about 6 km per morning (3 km in each direction), and I have again been going to aerobics class in the evenings.  My windbreaker is not quite as snug as it had been when I first arrived here, so I imagine that I have lost some weight. When I go back to New York, I will get myself a good pair of hiking boots with good support for my feet and ankles and hopefully avoid becoming incapacitated again…

The time is fast approaching for me to leave Cofradía. In 2 days, I will catch a ride to Tlaquepaque, and on July 2nd I will be flying home. The 2nd of July will be a long day, with my flight leaving Guadalajara Airport around 7:15am, landing at Stewart Airport in Newburgh at 10:30pm, with stops in Los Angeles and Philadelphia. The price was right, and it was close enough to home that no one minded picking me up, so it was worth it to me to fly all over the country to get there. Also – only a 2-hour turnaround in Los Angeles, so I will have no checked luggage, as I don’t want to take a chance on missing my connection because of the extra time it would take to collect checked bags, go through customs and immigration and security, re-check my bag and get to the departure gate.

Since I have so little time left here, I am trying to make the most of it. Recently I went with a friend to a restaurant in Jalisco that had been owned by Germans. It was also a hotel and had beautiful grounds, very old rooms with loads of antiques, including cabinets and jars for herbal medicines, fascinating sculptures and photos of the famous people from the area.  One thing I also learned while having lunch there – always taste the food and condiments before diving in.

There was a serving dish resembling a small gravy boat that had a green pureed substance in it. I incorrectly assumed it was guacamole and proceeded to pour liberal amounts onto my food. One taste and my mouth and throat were on fire – it was 100% pure, pureed hot chili peppers. I was able to scrape most of it off my meat, but the beans were a lost cause, and I had to have them bring me another plate.

Last night I had dinner with Richard and Magda, and then coffee with Lourdes and her family. One last morning walk tomorrow, one last Spanish/English class this afternoon and one last aerobics class tonight. One last visit with Doña Meche tomorrow.  So many “one last” things to do here, and then two full days at Tlaquepaque before going back to the States.

Esperanza hotel and restaurant in Jalisco 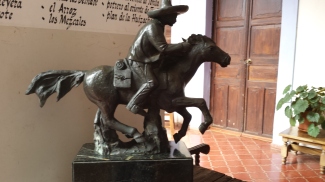 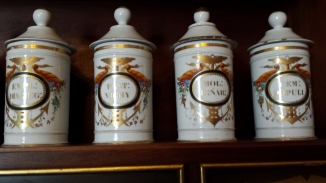 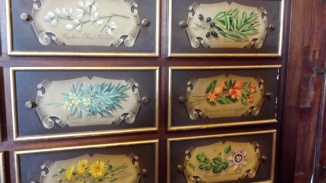 First governor of Colima (I think)

Bananas forming on Ted and Susan’s banana tree. Leaves peel back as each bunch begins to grow

View over the railing on Ted’s patio. We are close to the tops of the very tall trees