There are always adjustments to make whenever you venture outside your comfort zone.  You may be trying new activities, learning a new language or any one of a number of things.  The adjustments required are even greater, progressively, when interacting with a different culture, a foreign country where they speak your language and the ultimate challenge to your comfort is when you are in a foreign country where the culture and language are not your own.

During the past few decades, I have traveled across the United States and traveled to Europe, Asia, Africa and Australia. The English language varies greatly across the United States – for example that fizzy drink can be called soda or pop, depending on which part of the country you happen to be. In England, we were often separated by our common language, either by our accents or different words to describe the same thing – lift for elevator, boot for the trunk of a car, or Flat White American for a cup of “regular coffee.”

I’ve lived in villages with no electricity or plumbing, which included pit toilets and no running water in the dwellings (no tap in the kitchen, no shower, etc.). So I consider myself pretty adaptable.

Being a Professional Registered Nurse AND being from New York, I was used to a fast-paced life. Everything needed to be on time, if not a few minutes ahead of time. Days, hours, minutes and sometimes even seconds mattered. And this was my mindset when I arrived in Mexico.

The first thing I had to learn was Mexican Time. I guess many cultures have different names for this. There is Island Time, African Time, or an African Week, and all signify the same thing; time is much more fluid in these places.  If I am invited to a party here in Mexico, and they say it starts at 8pm, then it might start at 9pm or 9:30.

Another thing is driving habits. I almost never see a driver use a turn signal, and stop signs are more of a suggestion than a requirement. When crossing the street to get to the Equum ballet yesterday, there was a stop sign and we thought we had plenty of time to cross. A driver sped through the sign and never slowed down, honking his horn as he passed by and almost hit me.

For the first Equum performance we attended, the posters said the ballet started at 8pm. So we arrived a little early, and what we saw was an exhibition of horses that lasted an hour. So the ballet actually began at 9pm.

Last night’s performance was also supposed to start at 8pm. Judging from the previous week, my friend Magda and I figured we had at least an hour to go, so we had a nice leisurely dinner at a nearby restaurant, and brought our pillows (because the metal bleachers were painful to our bottoms after a while) and took our seats at 9pm.

We were assured by the people sitting behind us that we had not missed the ballet. And for an hour we watched as riders took their horses through their paces and were given scores. I have never been around horses in the past, so to me it was just people riding in circles with their horses. I did learn a lot, as Magda explained what the judges were looking for in the riders and horses.

However, as the hour dragged on, we were getting anxious about seeing the ballet. There were little children becoming restless, and Magda had to be at work at 7:30 the next morning, after having worked since 7:30 the  morning of the ballet.

Suddenly we heard a lot of whistling from the crowd. Now you may have noticed that when there is Mexican music and singing being performed, there will be whistling and loud cries which add joy and energy to the performance. People are smiling while they are either doing this or listening to it.

The whistles we heard last night were whistles of displeasure and frustration. It was quite different. The announcer heard it and responded that we should be patient and show respect to the performer and that the ballet would start in 20-25 minutes.

If that was accurate, then the ballet would start 2½ hours after it was supposed to. We decided to get out of our seats and walk around to see the tents. We saw beautiful paintings for sale, belt buckles, bags, hats, etc. for sale. Saddles for sale and a food tent that we had not noticed before.

On the opposite side from our bleachers, we saw some of the performers waiting until they were able to enter the arena. Many beautiful costumes which appeared to be Spanish from Spain, some men with hats specific to Colima, a woman in a beautiful Spanish dress,  all trying to cope with the long wait.

At 10:30p it still wasn’t time for them to start, so Magda and I reluctantly left and we noticed quite a few other people leaving also. Sometimes Mexican Time is too fluid and relaxed even for the Mexicans. 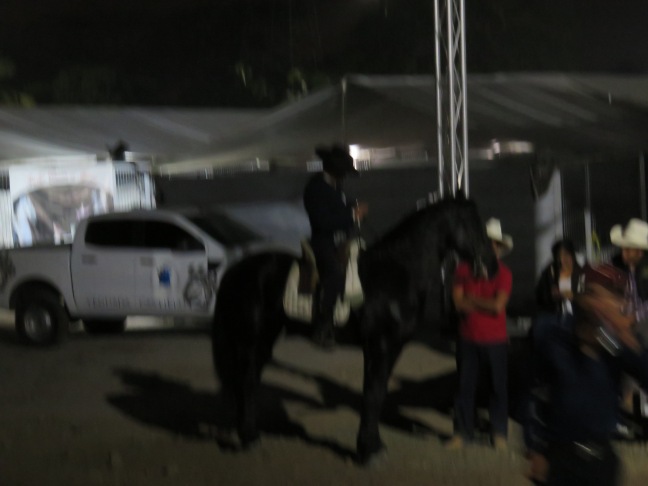 So, yes, there are some cross-cultural frustrations. And you are a guest in their country so it is up to you to adapt, but with time and observation you can gain insight into what is acceptable and when even the locals get frustrated.

Eso es así (that is how it is), but I am still grateful for the way my life unfolded that led me to my new life here.

Until next time, adiós !