I have been living in Mexico for two years now – and I cannot believe it has been that long.  There are only about 6 people here besides me who are fluent in English and I do not see them on a daily basis. Many people back in the U.S. have said to me, “Well, I guess you are fluent in Spanish now,” and I always answer, “No, not really.” I can pretty much handle the normal everyday conversations, sometimes by pantomiming or describing something when I do not know the exact word.

I believe my grammar is improving, my vocabulary is expanding little by little, and I am still horrible on the telephone because I lack the visual cues I need to understand spoken Spanish.

One of my Mexican friends is married to an American. She told me that she depended on him to translate for her until one day he refused to do it anymore. He said that she would never learn English until she was forced to. She told me that at first she was very angry, but then realized that he was right, and so one of the things she did was to take a class that was given in English. All the rest of the students in the class were Chinese, so she said to me, “What was I going to do? I either had to learn Chinese or learn English.”  And that helped me to go to one seminar and two classes, all given in Spanish.

The first was a nursing seminar last year. I was able to follow all but two speakers because all but those two had really good PowerPoint presentations along with their talks, so I could listen and also read, and in that way have an almost complete understanding of what was being said. (When I came to Mexico, I could read and write very well – it was the verbal communication with which I was having a problem, and more difficulty speaking than understanding the spoken word. I think this was due to remembering vocabulary once I heard it, but with speaking, you have to pull the words out of your memory, not just recognize it once you hear it.)

The second was a class regarding sanitation for culinary workers. This included washing your hands, safe handling of food, proper temperatures, cleanliness of the work area, etc.  This was easily understandable to me, as I already knew most of the spoken vocabulary.

When my friend Lourdes told me about a pastry and presentation class, at first I was hesitant, but then decided it was time to jump right in and sink or swim, so I signed up along with her.  The one classmate who did speak some English spoke very little, but I was not going to completely drown as I have come to depend on Lourdes to slowly repeat the Spanish that I don’t catch or understand, and I could also copy her notes. And so we arrived at our first day of class on February 21st. 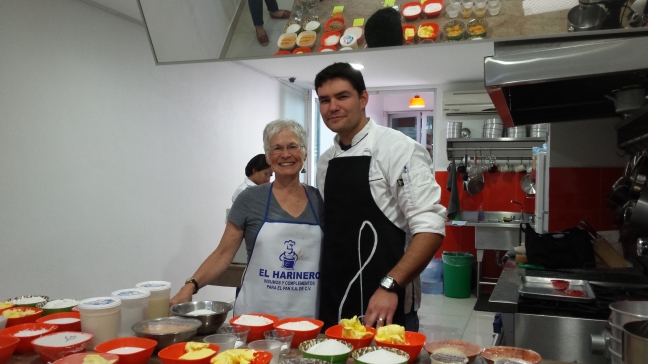 Me with our instructor, Chef Santiago Rico

I had the notebook that was provided for the course, and a separate notebook where I wrote my new vocabulary words. Through the wonder of modern technology, my Google dictionary was able to provide accurate translations for me, and sometimes I would make a drawing to help me remember. 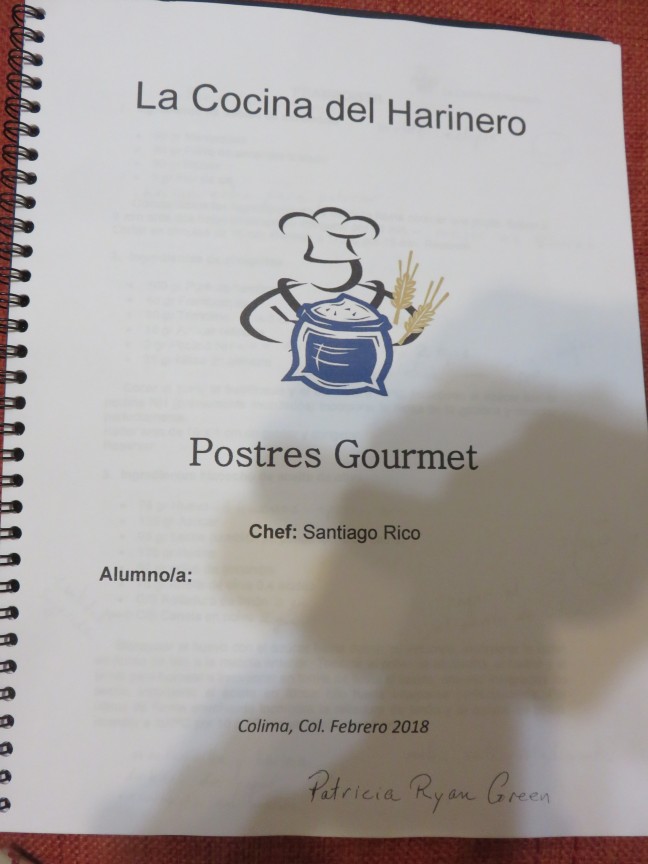 My vocabulary notes. Some things still had to be explained, in spite of Google Dictionary. For example, betún translates as bitumin or shoe polish, which didn’t make any sense in a cooking class. What it meant in this case was a decoration for a pastry. The Frida and Diego at the bottom refers to some event where certain types of pastries will be prepared reminiscent of Frida Kahlo and other types to signify her husband Diego Rivera and it will be held this month – February.

So class began with ingredients lined up in rows of two, one row for each of the tables of students. I was able to follow the general idea of the lectures and instructions, and I was even able to ask a few questions. I did learn quite a few new things, too. Vainilla molina is clear vanilla extract with a stronger vanilla flavor. Cocoa negra is black cocoa baking powder with a more intense chocolate flavor. 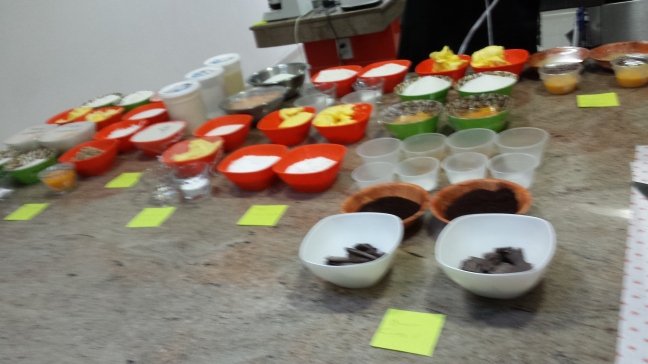 It was educational and also a lot of fun and camaraderie in the all-female class. Many discussions among the students I couldn’t follow but many I could and was able to join in the conversations at some points.

The classes were held over three days. The first day we made the basic cakes which would become cream puffs or the cakes of layer cakes, etc. when we created the frostings and fillings on successive days.

Day One – The Basics

Brownies, cakes, eclairs and cream puffs without the frostings or fillings

The second day we worked on the frostings and fillings, using creams, different types of sugars and fresh fruits. And here I also learned some new things, such as glucosa (glucose) and azúcar (sugar) are two different things when cooking.

And finally, on the third day, Chef did most of the work decorating and mixing, with some help from us under his direction. 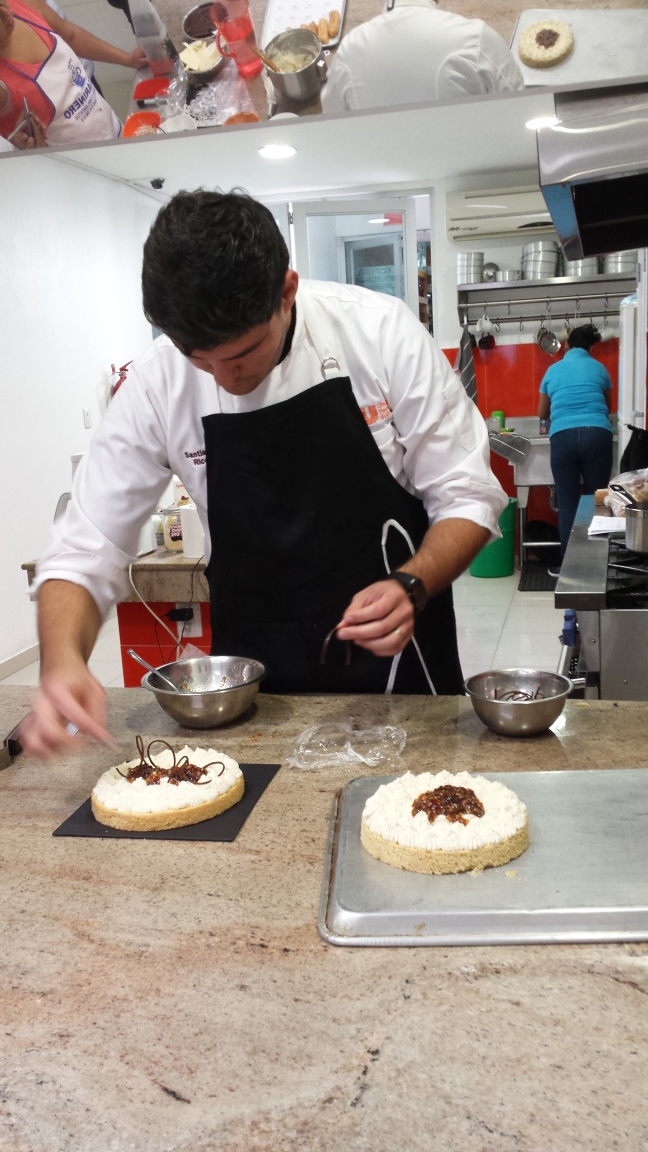 Putting on the finishing touches.

Dividing up the pastries so we can all share the results of our hard work.

As an aside, I should also mention the use of titles here in Mexico. If you are a teacher, you are addressed – even if you should meet someone in the street – as Maestra or Maestro.  Our chef was addressed as “Chef.”  You are addressed according to your profession, which I find very respectful.

And at the end of the final class, the pastries were divided up and we all got to take some of each home. Yuuummm!!!

We students took up a collection and gave our dear Chef a parting gift – a statue of Los Perritos – the dancing Colima dogs.

This isn’t two photos – there is a mirror over his head so we students can see the work table.

Diplomas were handed out along with our share of the fruit of our labors and we were on our way. I survived my latest adventure in immersion Spanish with new knowledge and new acquaintances and I am definitely looking forward to any more classes that will be held here.