For three weeks, we had been traveling from place to place by air – large planes, tiny planes, connections which we barely made, and so on and so forth. Since our next stop after London was on the same island, I decided to give us a nice experience by taking the Caledonian Sleeper train from London to Glasgow.

We arrived at London’s Euston Station around 10:30pm and found our train. I had reserved two private berths which was a good thing. Each berth, even if reserved privately, had two beds, one above the other. There was a sink and enough space for my two suitcases. It would have been uncomfortably crowded if we had been in the same compartment.

Unlike the long-distance Amtrak trains, there was one bathroom and one shower per train car, not located in the berths.  I don’t remember exactly, but I believe there might have been 6 berths per car, which would be up to 12 passengers total, or maybe 7 berths and 14 passengers.  Since we would be arriving in Glasgow around 7am, I decided that my shower could wait until we reached our Air BnB.

For me, it was a luxury not to have to worry about arriving at an airport, going through security, and all the other things involved in air travel for a change. For me, the room was cozy and comfortable. I love looking out the windows, whether on a bus, train or hotel, and so I lifted the shade. It was around midnight when the train began its journey, so of course I would have to wait until sunrise to see the landscape, but I read a little and then went to sleep.  Before going to sleep, an attendant came around to take our orders for breakfast.

Waking up at sunrise, I could enjoy the landscape outside and before arriving at our destination, we enjoyed breakfast delivered to our berths. 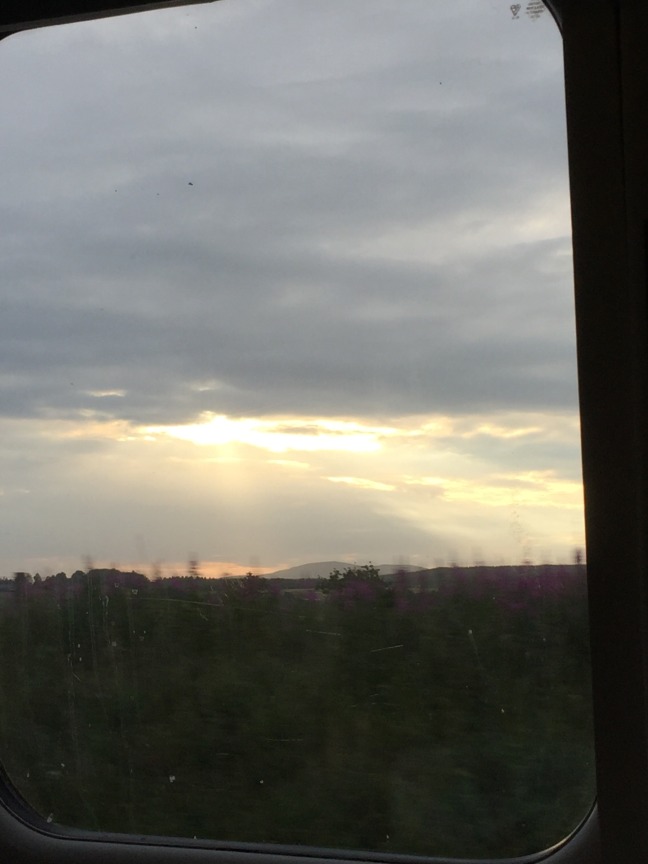 view from the window of my Caledonian Sleeper berth

Once at the station, we took a taxi to our Air BnB accommodations. This time we were in a lovely house where our hosts Fiona and Alex lived. Brenna and I each had our own bedroom, which was nice. And – they also had a washing machine, so we would be able to do our laundry! Yaaaayyyy!!!!

Fiona showed us around the house and we had a nice chat. After a while we walked into town and found a supermarket where we could buy some groceries. There were little Scottish meat pies, cookies, scallops still in their shell and the fish fillets were died a yellow color. An explanation was given when I asked about the yellow color, but unfortunately I didn’t write it down in my diary, and since it’s been over 2 months since that time, I am at a loss to explain it.

The following day was our appointment with Refuweegee, the organization that cares for the Syrian refugees who arrive in Glasgow. For those who follow my blog, you know that I have already published a post about them. For those new to my Facebook page, I will post the article after publishing this one

Selina and Sarah of Refuweegee, with me and Brenna

I was so impressed with the spirit of the Glasweegians, particularly their care for the refugees among them who had lost everything.  If I was in my 20’s or 30’s again and had to pick another place to live, it would definitely be Glasgow.

copy of one of the welcome letters included in the welcome pack, given to the refugees when they arrive in Glasgow

The train station was only two blocks from Fiona’s and Alex’s house. We waited and waited and several other people arrived and were waiting also. Finally one of the dads called somewhere on his cell phone and found that there was construction work being done, and so the train would not be arriving for several hours.

So we went back up to the street and hailed a taxi, arriving to our appointment at Refuweegee just in time.

That evening, after arriving at the house, we had long chats with Fiona and Alex. We also received directions on how to get around Glasgow by bus and the subway, and also the number for a taxi service.

I had read of a museum called the Hunterian on the grounds of Glasgow University, so we took the bus and subway, then walked around for what seemed like forever before finding the museum, due to construction and confusing directions that we received from the locals.

In one section, there were loads of ancient artifacts, but what interested me the most was the medical section of the museum. Glasgow was the seat of advances in neurosurgery, and I had been using the Glasgow Coma Scale for evaluating my patients for decades, not making the connection until I saw this exhibit, and then saying to myself, “So this is where it all started.”  I was awestruck, standing in this place in front of the actual instruments and papers from so long ago. 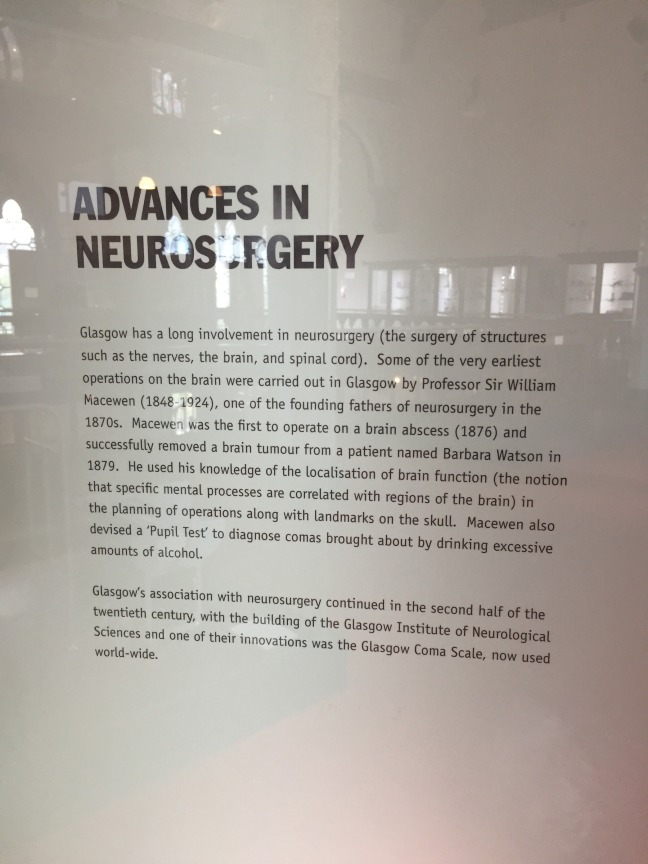 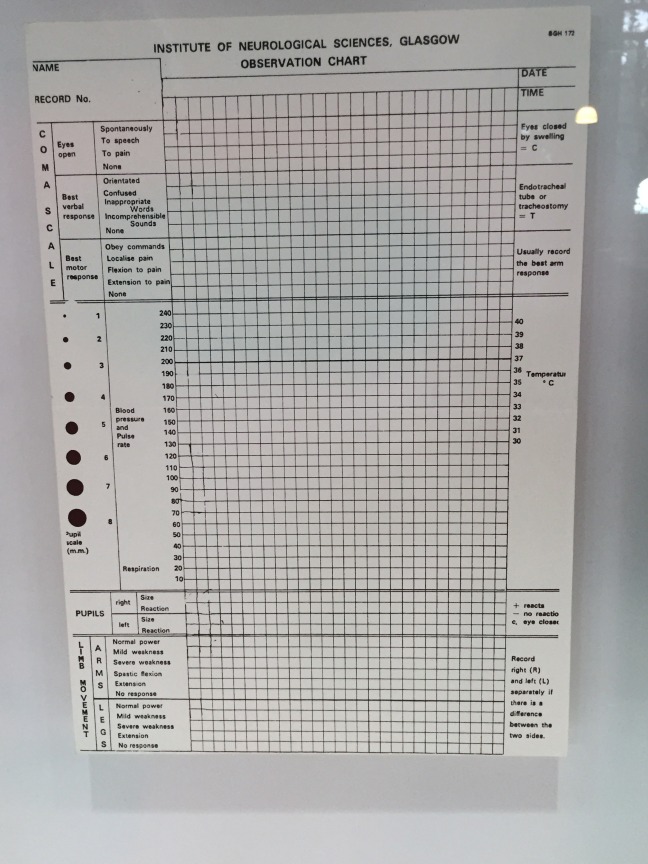 Another interesting exhibit was the Blackstone chair, still in use at times. Students having their oral exams would sit in the chair. An hour glass would be turned over, and when the sand had all gone to the bottom of the glass, the student’s time was up and it was then the next student’s turn. 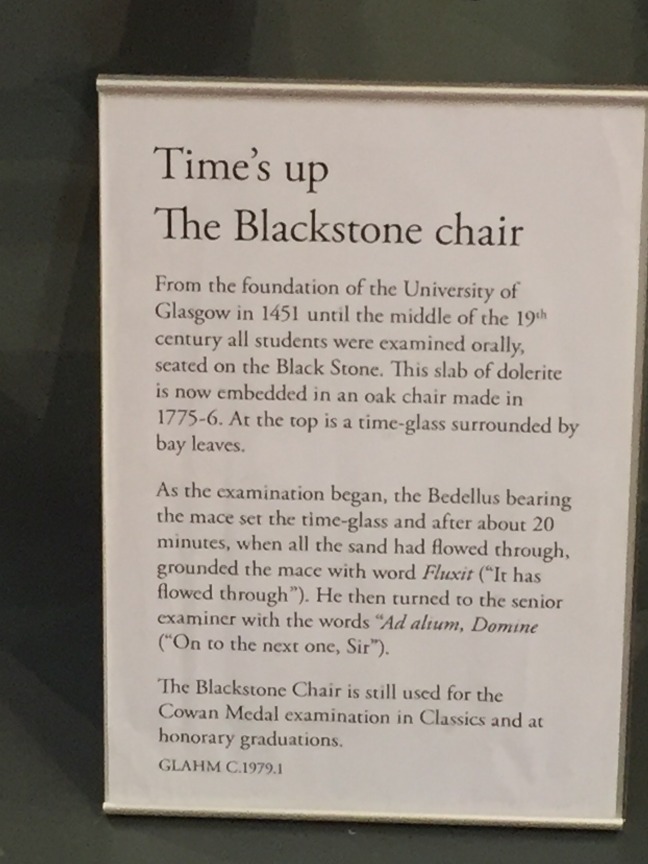 There was also a plaque in honor of James McGill, founder of McGill University in Montreal, Canada

After the museum, we continued exploring Glasgow.  With fewer and fewer stationery and book stores, at least in the U.S., we were thrilled to come upon an immense store named the Paper Chase, two floors of every type of paper, stationery and writing implements you could think of, and Brenna discovered pen/brushes that looked like thin markers but painted like paintbrushes.  We also walked around a nearby mall, and of course there were shops with all kinds of Scottish clothing and wares. 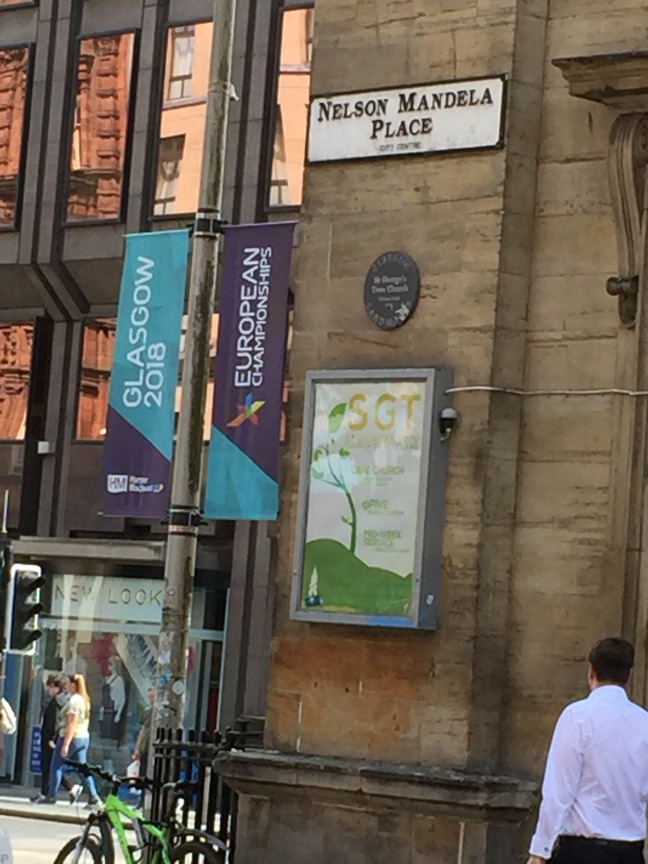 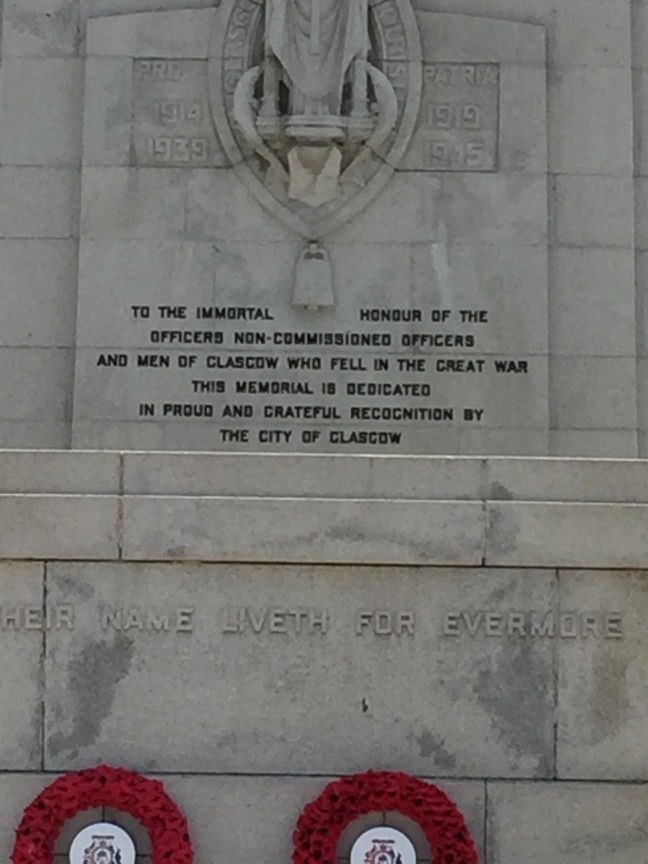 After a while, we went to the bus stop, but it took a while to realize the bus we wanted had stopped running for the day about 1/2 hour before we arrived there, so once again we hailed a taxi to go back to the house.

I also have to comment on the Scottish accent and pronounciation. The people of Glasgow call themselves Glasweegians and Edinburgh is pronounced Edin-boro.  Although they are speaking English, when speaking with someone with a heavy Glasweegian accent, it was extremely difficult for me to understand them. If you want to hear more about this, you can check out You Tube for some videos. One video blogger is Wee Scottish Lass, but there are many others where you can learn the vernacular.

That Saturday I had booked an overnight flight from Glasgow to Mexico City via Amsterdam. In the past I had flown to Sydney, Australia from New York for a Rotary International convention, in coach. It was so uncomfortable and the risk of blood clots so severe that I swore I would never fly coach for such a distance again (total time was about 20 hours or so). Therefore, in addition to spending extra money for the hotel in Paris and the Caledonian Sleeper, I purchased business class tickets for the flight to Mexico City.

First stop after Glasgow was Amsterdam, where we had a layover of about 3 hours. Along with our tickets, we could go to the lounge in the airport, where a meal and coffee were complementary.  And then it was time to board the Aeromexico flight.

The seats were in the front row and 4 across – two in the middle and one on either side of the bulkhead. Brenna and I had the bulkhead seats. So comfortable, and the seats actually flattened into a bed. As the flight was 12 hours, it was nice to be able to stretch out and not be cramped with my joints folded for all that time, so we landed in Mexico City refreshed.

Unfortunately, our flight from Mexico City to Colima had been changed, so there was a wait of over 7 hours, during which time we ate in the airport, read and walked around. After landing in Colima, we took a taxi to Cofradía de Suchitlán and I was finally home – and Brenna was about to experience The Real México !!!