In 2011, after many years of volunteering in Cameroon, I was searching for a new place to volunteer. Since I was still working full time, it had to be short-term and within my budget. Being in Rotary International, that year I attended the Rotary International Convention in New Orleans, Louisiana, and in the House of Friendship I met Ted Rose and Susan Hill, who were promoting their organization, Project Amigo, a literacy program based in Mexico.

Well, I was learning Spanish, Mexico was closer to home than Africa, it was affordable and the volunteer commitment was only one week, so I took a chance and volunteered. After the first week, I was hooked and continued to volunteer my time.

As retirement drew closer, I kept thinking that I might want to retire there. I lived my whole life in New York and hated the cold, snow and ice. I had vowed for years that when I retired I would move to a place where I would never have to see snow again. With the volunteer work weeks, I was getting to know the residents of the village as well as the staff of Project Amigo, the weather was great and life was much simpler there.

After being warned by one of the board members not to jump into it, but to stay there for 6 months and then make a decision, I moved into one of the volunteer residences in January 2016, but after 3 months realized that Cofradía de Suchitlán would be my home.

I met a nurse named Magda during my first volunteer week, and we had remained friends over the years. She and her husband Richard were selling their house – and since I had always loved their house from the first time I saw it,  I bought it.  And so, when planning this trip, I let Brenna and her mother know that I wanted her to see my village and my home before she returned to New York.

So after our 12-hour flight to Mexico City, a connecting flight to Colima Airport and then a taxi ride, I was home!

The itinerary here had been carefully arranged, as I assumed that Brenna would like to interact not only with SOME English-speakers, but would also like to spend time with someone her own age.

There are just three of us living in the village who are native English-speakers – myself, and Ted and Susan, who just happen to live around the corner from me. So we had lunch at Ted and Susan’s house along with my Canadian friends from Colima – Stephanie, Steve and their son Matt, with whom Brenna was very happy to have a long conversation, and in the process learn many words that are not taught in school, if you catch my drift.

We also visited the Casita del Café for refreshments.

In my absence, the owner (and my friend and neighbor) had been making apple pies from my recipe, but the customers could tell the difference and were clamoring for pies made by hand by “Paty,” and so one day was spent with Brenna helping me make my famous pies to keep the customers happy.

Meanwhile, the first thing I noticed when we returned to my home was the bananas on my tree needed to be harvested. From their weight, the tree had bent over, so the bananas were now resting on the ground. Knowing how heavy they were, I enlisted Brenna to help me bring them to my porch. Armed with my machete, I began to cut the branch away and after a few seconds, dropped the machete and ran away shouting.

Unbeknownst to me, there was a large wasp’s nest under one of the leaves. You can see part of it as a white, round ball on the right middle side of the photo. Well, the buggers got me on my arms and face. Fortunately, they did not sting Brenna.

First things first, I ran into the house and took 50 mg of Benadryl. Then I sprayed Raid on it.  Next day, there were still some left alive, and I had heard that mixing laundry detergent with water would do the trick, so I not only did that, but got out the Raid again.  A while later, there was nothing left alive from that nest and we were free to carry the bananas to the porch.

We tried to string them up, but they were so heavy that the two of us couldn’t do it. Fortunately, when my gardener Angel arrived, they were strung up and would ripen just fine where we left them.

with my trusty machete examining the bananas

While planning the trip, Brenna was asked what she would like to do and what were her interests. She mentioned art, castles and the beach. The first two requests were taken care of in Europe, but we still had to go to the beach.  Brenna told me she had never been to the ocean, and fortunately the Pacific Ocean was only a 90 minute drive away. Coincidentally, there is also a turtle sanctuary near that beach, so a big outing was planned for us, my friend Lourdes and her family, including her two young grandsons who had also never been to the sanctuary.

But before this happened, Brenna was about to become familiar with another medical facility – this time in Mexico.  One day I decided we would go to Colima for lunch and invited another neighbor to go along. Unfortunately, the neighbor decided to vomit all over the inside of my car while we were on the road. My first instinct was to turn the car around, but realizing we were halfway to a clinic, I headed in that direction, only stopping in the parking lot of a shopping center to run in and buy a shift dress, towels, wipes and a bottle of water.

When we arrived at the clinic, they directed us to a bathroom where I changed my neighbor’s clothes after cleaning her up as much as possible.  She was examined, medication given, then we went to a pharmacy to fill her prescriptions and headed home.  Then I cleaned up the car as much as I could, and sprayed tons of deodorizer on it.

By the next day, there were so many people to accompany us to the beach that I had no choice but to use my car.  One of the guys drove and I sat on towels in the front passenger seat where the baptism of my car had taken place.  The day after the outing, my car spent the day at the automotive place where they had to take the seats out to do a proper cleaning, but 10 hours and 900 pesos (about $45)  later, it was like new.  God bless those guys – it had to be a real nasty and smelly job and to top it off, it was a brutally hot day.

And PS – I always have a bucket and towels in my car now in case of another emergency, and still am nervous when this particular neighbor is my passenger.

Anyway, back to the outing.  El Tortugario Ecologico is a national reserve in Cuyutlán, Mexico.  Sea turtle eggs are collected, then buried in the sand in a protected area. When the eggs hatch there is a “turtle release” where the babies, called hatchlings,  are placed in the sand near the shore and allowed to make their way into the sea.  Without humans around them, most would surely be picked off by birds or the eggs would be dug up by animals.

There are also turtles of various ages and species protected in tanks for breeding or for protection if for some reason they would not survive if released.

Classes are held for school groups and the general public. There is also an area which houses two crocodiles and there is a boat tour of the lagoon. We were very fortunate that there was to be a turtle release the day we visited, but it was not to happen for several hours.  However, when talking to the staff, they took pity on us and arranged to release a few of the babies just for us before the actual stated time.

We were told that we must handle the hatchlings with clean hands – no smells such as perfume, hand cream or sunscreen, so as not to confuse their sensitivity to Earth’s magnetic field, which is how they navigate and are able to return to lay their eggs to the exact location where they hatched.

Brenna with her hatchling

And so it was time to release the hatchlings. A line was placed in the sand and we had to stand behind the line and put them down in front of the line. Once we let go, we were not allowed to touch them again. Even if the waves knocked them upside down, or tossed them back onto the sand, we could not touch them, as it would interfere with the imprinting onto their brains of the magnetic field location of their “home” beach to which they would return as adults.

If you wish to learn more about this wonderful turtle sanctuary, you can find it on Trip Advisor in English and you can Google it for information in Spanish.  If you are visiting Mexico, especially with children, it is well worth the trip, though turtle releases are not guaranteed with your visit.

After the sanctuary, we headed to Tecoman for a nice lunch. At this restaurant there was a swimming pool, so we all cooled off with a swim and had a delicious lunch. The restaurant sits on the beach, but the current is too dangerous for regular swimming activities. However, Brenna did get to go into the Pacific Ocean, where we waded and splashed around a bit. 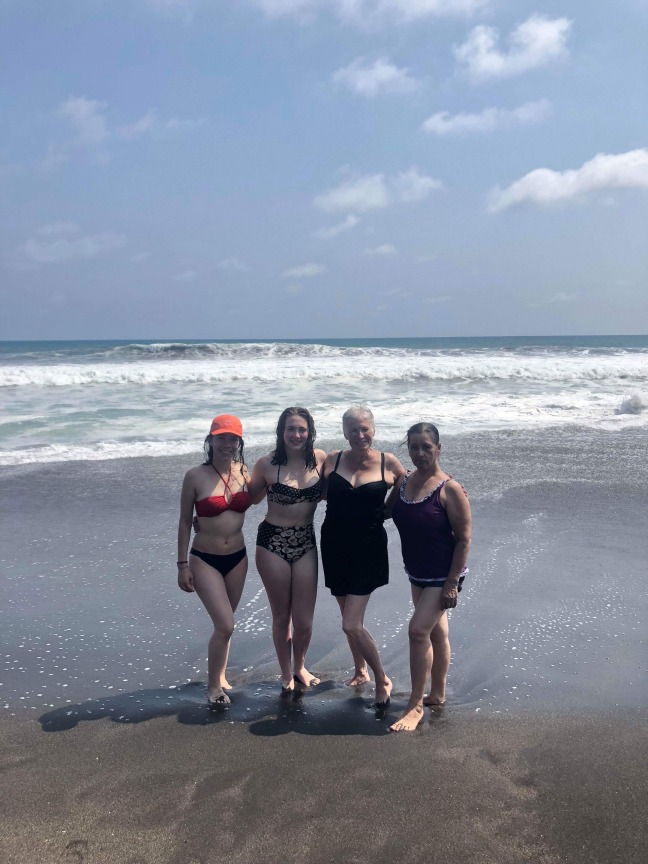 And so we returned home after a day of fun and sun.

Our final day in Cofradía was spent at Project Amigo. Each of the work weeks has a specific theme, and this was “Swim Week.” We walked the few blocks to the Project Amigo office and had breakfast with the other volunteers.  The day before, the volunteers had packed backpacks for the students and we helped them to distribute the packs to the students in Quesería, the migrant camp, where Project Amigo had built additions to their school.

We had a regular ceremony where each volunteer would take a pack and the student and a parent would come up to receive it. The parent would then give words of wisdom to their son or daughter.

The other half of the day was spent at the pool, where our students were taught how to swim and various games were played in the pool. One of the girls spent a lot of time hanging onto Brenna, and I assisted with the weaker swimmers, supporting their bodies as they swam.

That evening we had dinner with the volunteers and the two students I support were there also. So Brenna was able to get to know the volunteers that day, including some close to her age, and also to meet my students and give them gifts from our European trip.

Well, seems I have written quite a lot for today and I imagine you all must be getting tired. So, I will end here for now and finish our tale with my next post.  So have a good night and see you next time!