After a fun-filled week in Colima, Mexico, it was time for my world-traveling granddaughter to return to her family in New York State. But before that happened, I decided we would make one more stop in Mexico in the state of Jalisco.

We went by bus from Colima to the town of Tlaquepaque, near Guadalajara.

The town of Tlaquepaque is a very nice town full of artisans. You can find many shops with pottery and fine clothing, paintings, sculptures, museums and many very good restaurants. During the day the streets are lined with people selling homemade wares – jewelry, pocketbooks, etc.  I felt it was a good way for Brenna to see another aspect of Mexico before returning home.

statue outside of the Sergio Bustamante gallery

Fortunately, all this activity was just a few blocks from our hotel, so we could spend the day walking around, go back for a rest and then go back out again. I have absolutely no sense of direction, even when using paper maps and a GPS, but I had been in this hotel many times before, so I knew my way around.

That night we went to a restaurant on Avenida de Independencia, and while we were eating, a man asked if he could draw our caricatures, so I said ok.  It took him a while, since he was drawing both of us on the same canvas, and when he was finished, my face was pretty accurate, although I wasn’t drinking as the drawing indicated, but with Brenna’s face, I think she looks more like Ashley Judd – though maybe in a few years she WILL resemble the picture. 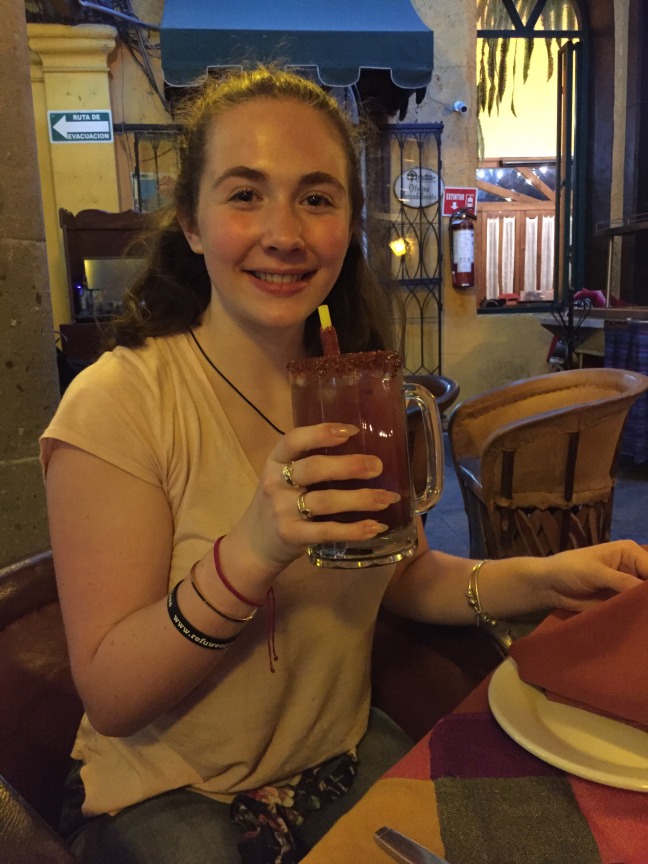 After a good night’s rest, we headed to the airport by taxi. Once we were in the airport, we were about to have a problem regarding luggage. I had bought 4 pieces of pottery in Tlaquepaque, and was not about to put it in my checked luggage. When we got to the security line, I was told that I could not take the pottery on the plane, that I would have to check it.

After arguing for a few minutes, the man on line behind me stepped in – turns out he was a pilot. He asked what airline I was flying, and when I said Interjet, he rolled his eyes. He told me that if I could fit the pottery into one luggage bag, then I could take it by hand onto the plane.

Fortunately, one of the shops in the airport sold luggage, and I was able to buy one cloth bag in which all the pottery fit. And so with everything in ONE carry-on bag, we passed through security and were on our way.

It was an overnight flight and we arrived the following morning, around 6am, at JFK Airport, were picked up by her father Jake and headed to Upstate New York.

Yes, we have deer.  And grass. And trees. Manhattan is only a small part of New York.

Family came to visit and gifts were given out. Brenna’s mother Kathy even made me Stouffer’s Macaroni and Cheese, because she knows it is my comfort food when I am sick and I can’t get it in Mexico.

Brenna was very fortunate that her boss at her new job allowed her to take a whole month off for our trip, and so she had to go back to work the day after we returned.  As a result,  I  spent the day with her father’s mother and visited a former co-worker of mine, Carol, and delivered two of the pieces of pottery that I had bought for her – one as a housewarming gift and one stayed wrapped to be opened on Christmas.  The other two pieces went home with me.

It was nice to see everyone again, especially since I don’t anticipate returning for another two years. It was well worth the cost of the trip, but now it is time to start saving up and replenish my bank account.

Since time wasn’t an issue to return home, I decided to save the family from  having to go down to New York City again and I flew out of Stewart Airport in Newburgh, a small airport nearby.  Being a small local airport, direct long-distance flights aren’t their thing, so my itinerary was:

followed by a 3-hour bus ride from Guadalajara to the Colima bus station, followed by a taxi ride home.  And so ended the Great European Adventure. I am sure over time Brenna will find that she learned more than she might realize now, and while there were certainly stress and homesickness for parts of the trip, it will still be fondly remembered for years to come.